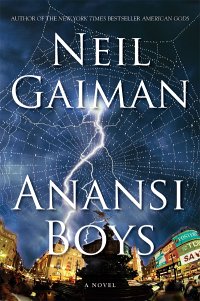 Whew, I’ve got to read Neil Gaiman’s blog more often. Catching up, I just discovered that his new novel, Anansi Boys, is being published on September 20. Coming sooner is the illustrated MirrorMask script in May. Still no solid release date for the film, but apparently it will get a theatrical release late in 2005: “I think it’ll be released in early autumn.”

Early autumn, eh? With a new novel released on the last day of summer? I don’t know how the numbers stack up on Neil’s name recognition vs. the average “art house” movie—which is how the studio seems to be treating it—but it wouldn’t surprise me at all if Columbia/Tristar tries to capitalize on the publicity for Anansi Boys.

Of course, it also wouldn’t surprise me if they said, “Huh, he writes books? I thought he was a screenwriter.”