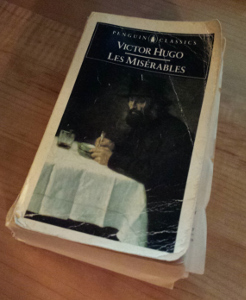 Last week I finished re-reading Les Misérables. I’ve been working on this off and on for most of the year, taking breaks to read other books along the way.

I don’t feel finished yet, though, because I set myself the challenge of commenting on the whole thing as well, and I’m way behind on that. The main problem is that when I switched from carrying around the rapidly disintegrating copy of the book to reading on the tablet, I also switched from writing notes on my phone to highlighting passages in the Kindle app, with the idea that I’d write my commentary later. You can build on digital notes. With highlights, you have to do all your composition new, so my commentary started taking longer to write…and the longer it went, the less fresh those chapters were in my memory, and the more my commentary began to resemble summaries.

I did manage to write two commentaries right within days of finishing the chapters: the sewers, and Javert’s suicide. But I can’t post them until I get to that point.

Today I finished a new section of commenatry. This covers Marius and Cosette’s six weeks of secret meetings in her garden (during which Hugo is very insistent that nothing is going on), Eponine staring down hardened criminals with an awesome “You think I’m scared of you?” speech, Marius trying — and failing — to reconcile with his estranged grandfather, and what they’re all up to in the days (or in Marius’ case, the daze) before the revolt.

That brings me up to page 882 out of 1201 (not counting the appendices, which I’ve already covered). There’s about 180 pages to cover, the entire barricade sequence, before I can post the sewer commentary I’ve already written. I’m no longer certain I’ll be able to finish it all by the end of the year, but I’ve at least got a shot. Um, so to speak.

Read on for the new commentary, Over the Edge.