For the second day in a row we’ve gotten a notice of a Covid exposure in the kid’s classroom. One more case and it’s technically an outbreak.

Mask-optional was one thing when cases were low and flat, but the numbers have been climbing for weeks. And that’s not including however many at-home tests don’t get reported. The classroom is now mask-required for the next 10 days, which means the rest of the school year.

Fortunately the kid’s been wearing N95s since before the first exposure!

Well, it’s going to put a damper on end-of year parties, even if it stops here.

Update June 10: They managed to get through the rest of the school year without another Covid case!

Two hot takes (so to speak):

Auto-updaters shouldn’t run when the system is really busy.

And installers that check to see the whether the same or newer version is “already installed” should either be really thorough about what they’re checking, or offer to do a repair install anyway.

I’d fired up a game of No Man’s Sky, which even after redoing the thermal paste and adding another case fan still pushes the limits of my system’s cooling, especially if I forget to wait for all the background processes to finish loading on Windows startup. I left a space station, landed on a planet, started mucking around with the structure I had found, and hit a waypoint pole to save again—

And the system shut down.

I turned it back on to get the fans running again and help cool off. Which worked. But when I logged in, I had a bunch of errors with Google Drive. Apparently its auto-update launched during my GPU-intensive game and overheated it enough to reach the shutdown threshold.

Fortunately, I’d just saved my game — or so I thought.

I spent about half an hour trying to fix Google Drive before I decided to just go back to the game for now.

No Man’s Sky picked up seamlessly…at the previous save. Maybe the write cache hadn’t been flushed yet or something. I’m glad I only lost about a minute of gameplay, though… I’ve got several hundred hours on this save file, and I’d hate for it to get lost or corrupted!

Anyway, back to Google Drive. I couldn’t reinstall it because I couldn’t uninstall it, and despite my efforts I couldn’t remove enough traces of it for the installer to be willing to run. You can read the whole reinstalling Drive saga on my troubleshooting site, along with the taskbar that lost its icons halfway through.

I eventually fixed it by copying the installed program files from another system and running the uninstaller manually. That resolved both the taskbar icons and the Drive installer being willing to run.

Then I dragged myself into bed.

Yeah, it was a fun Saturday night. 🙄

Google wished me a happy second coronaversary this morning. 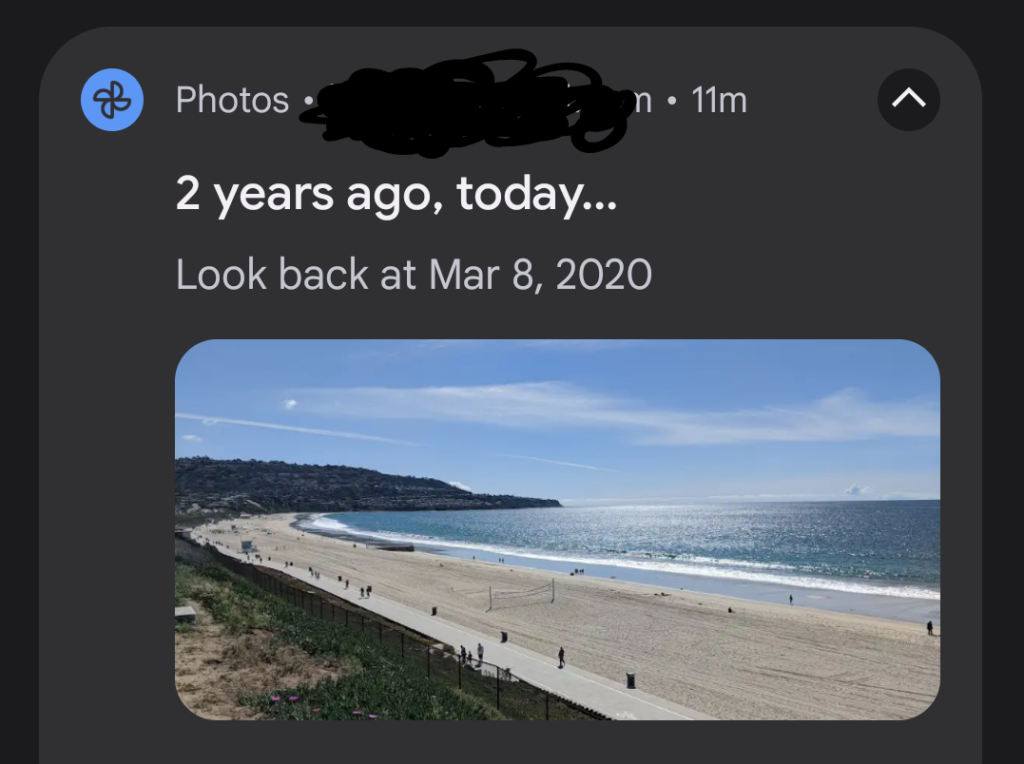 Well, not in so many words. But I count March 8, 2020 as my last normal day, the day I went out to de-stress by taking pictures of the ocean, seagulls, and a zillion tiny clams, grabbed coffee at Peet’s on the way home, and came down with the flu that afternoon. By the time I recovered a few days later, everything had shut down.

I never did get back to the office. I’m still at the same company, but they let the lease expire, tossed everything in storage, and set up a new, smaller office for people to come back to when things settled out.

I finally got to see the new office last month. And see some of my co-workers in person. And pick up the stuff I’d left on my desk, like a coffee mug that I would have washed on Monday morning if I hadn’t been sick.

It’s weird how it feels both longer and shorter than 2 years. Everything kind of blurs together. And yet it’s so different now from the start of the pandemic.

We’re not locked down. Just about everything that’s still in business is open, with precautions. Schools and playgrounds and parks are open. COVID tests are little boxes you buy at the pharmacy and use at home instead of driving through an improvised clean room for someone in a hazmat suit to stick a pole through the window.

It’s not “normal,” but it’s a lot closer to the old normal than those first months were.

The virus is still out there, but we understand better how it spreads and how to treat it, and vaccines make it a lot less likely to be severe for those who’ve gotten them.

(If only more people actually trusted the people who know what they’re talking about, rather than the ones telling them what they want to hear.)

On the down side, lots of people are still getting sick and dying, prices are up, the global supply chain hasn’t recovered, cynical politicians have taken advantage of the pandemic to further divide society and cement their hold on people who just want to be told what they want to hear instead of what they need to know, and a large nuclear power has decided now is an excellent time to invade their neighbors and possibly spark a bigger conflagration.

Things are still in flux. Which is probably part of why it’s still blurring together. We’ve still got problems to fix (or mitigate) at every level from home to global. Whatever the new normal is going to be, we haven’t made it yet.

But not having a direction, not having milestones, not having a sense what the landscape is going to be, makes it hard to see accomplishments, hard to be motivated. It’s been a draining two years. And even though a lot of things are better, other things are worse, and it’s still so damn draining. I’m exhausted, my wife’s exhausted, our kid’s switched school situations so many times he barely participates anymore.

I want a new normal. A better normal. But the last few years have also made it abundantly clear that more people than I thought don’t want to make things better, they just want other people to have it worse than them.

And yet I know so many people do have it worse than me. I have a job I can do from home. Even in the lockdown, I was quarantined with my family, not alone. I live in an area with enough open space that even during the heaviest restrictions I could still go out for a walk. My immediate family hasn’t caught COVID, and the extended family members who did recovered from it. And of course I’m not dodging mortar shells or fleeing a battle zone. So what am I complaining about? By some standards my life is charmed, so what business do I have feeling depressed and anxious?

Brains are weird. You spend a little time in fight/flight/freeze mode and you’re able to stop or dodge danger. You spend a lot of time in it and your brain just stops classifying input properly.

From this afternoon’s walk along the greenbelt: About as many monarch butterflies in one photo than I’ve seen in the last few years! 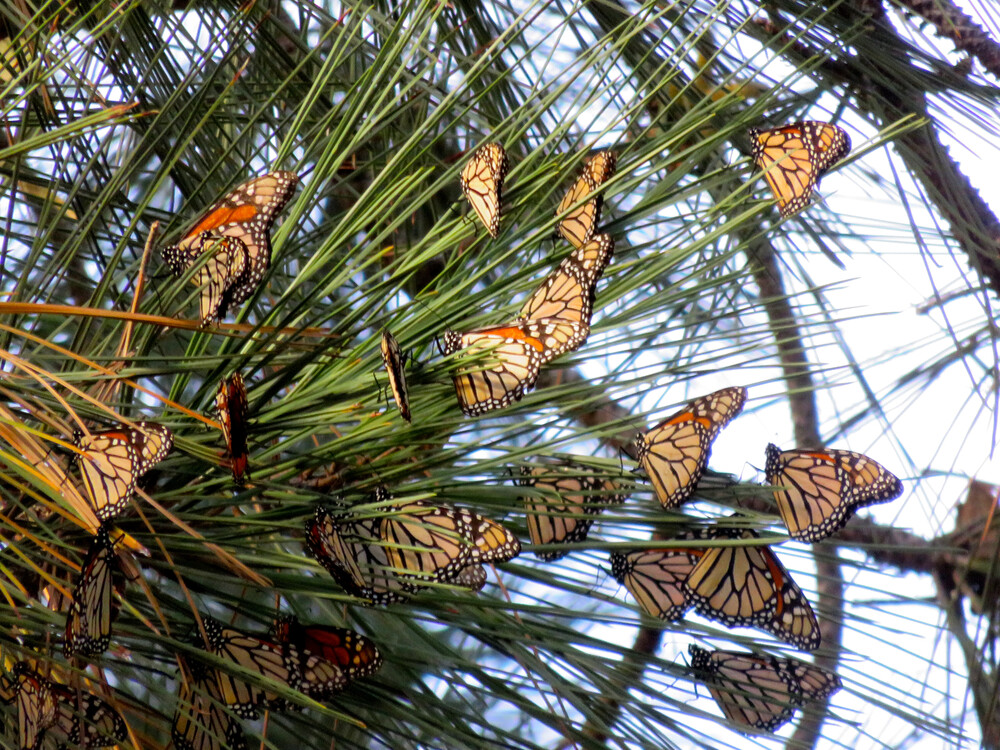 There were a whole bunch of them clustered on a pine branch above the path. I wouldn’t have even seen them, but other people out walking had stopped to check them out.

I was just reading that this year’s overwintering monarch count is up to over 200,000 – a huge improvement over last year’s count of, I kid you not, 1,914. Though still not up to the millions that were regularly seen as recently as the 1990s. That article lists ways you can help the iconic species rebound, or you can follow the Xerces Society’s Monarch Call to Action.

We actually got quite a bit of rain (for Southern California, anyway) in December, and the mountains have stayed cold enough that the snow has stuck around for a few weeks!

Here’s a view of the San Gabriels in mid-December, after a big storm. 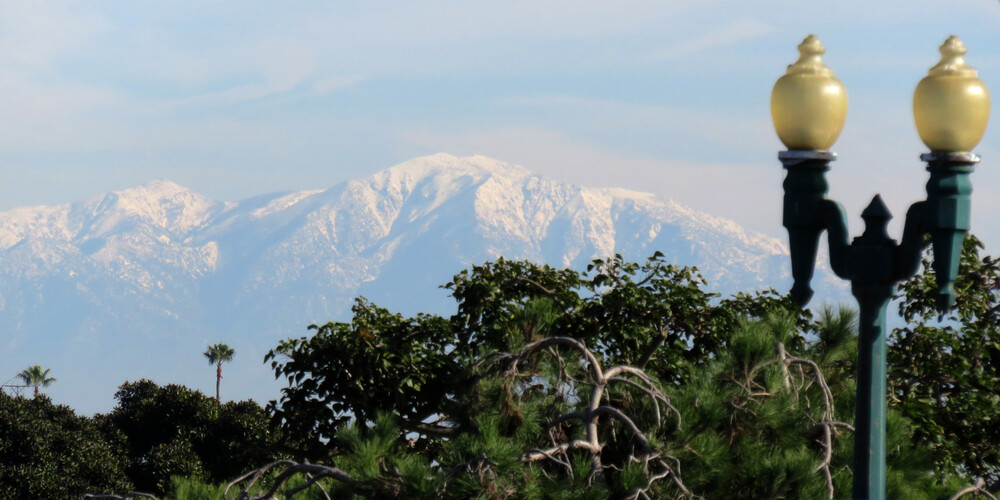 And here’s a comparable view a week into January. 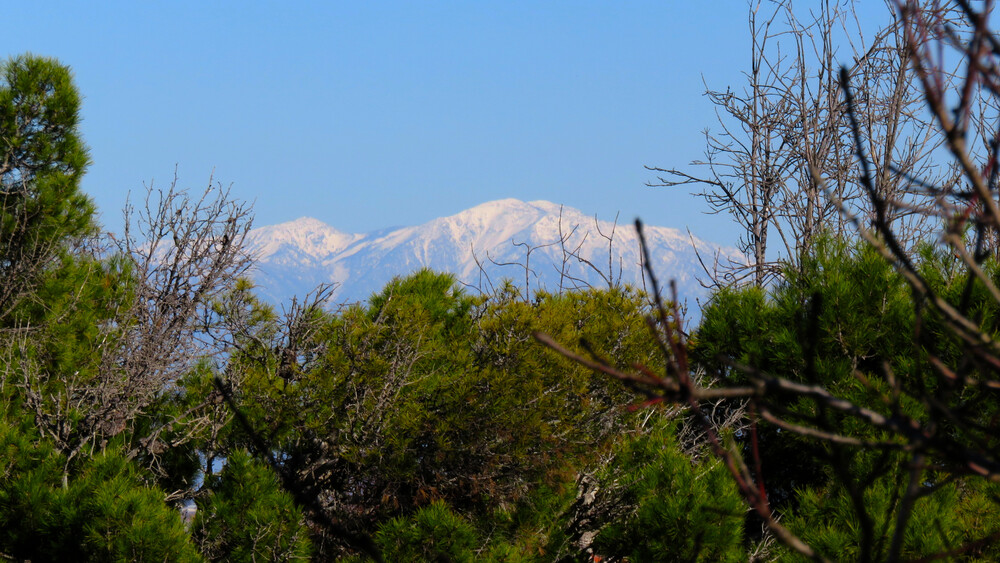 Nowhere near as impressive as, say, the entire range being covered in 2008, but that’s a rare occurrence even in non-drought years…and we’ve had mostly warmer and drier years since then.