This is going to be a long two months.

So it was weird last night to see an ad for Republican Mitt Romney contrasting himself against Democrat Hillary Clinton. Unless he’s changed party affiliation, he isn’t running against her. We don’t know if he ever will run against her. The Republican party hasn’t opted into California’s open primary system, so only registered Republicans are eligible to vote for Romney today, and they’re not likely to have considered voting for Clinton in the first place.

So who the heck was the ad aimed at?

Keep in mind that I don’t watch much TV, so this sort of thing might have been going on for a while, and I wouldn’t have noticed.

Had dinner at my parents’ last night, and at one point talk turned to yesterday’s primary election. It’s quite interesting that, within a matter of days, the Iowa Caucus and New Hampshire Primary chose different candidates for both major parties.

Putting too much stock in the results of one state-wide race makes as much sense as having Oregon voters select the next governor of Louisiana.

On a related note, what is it that causes so many fields to settle into the equivalent of a two-party system, with two major players (sometimes balanced, sometimes one dominant and one major alternative) and a bunch of also-rans? Republicans & Democrats, Windows & Macintosh, Internet Explorer & Firefox (and previously Netscape and Internet Explorer), Pepsi & Coca-Cola, etc.

Sure, humans like oppositions. It’s what makes the false dilemma fallacy work so well rhetorically. But why is either-or thinking so prevalent in some fields? And what’s different about fields in which many alternatives hold each other in balance? Car manufacturers, for instance, or movie studios, or cell phone manufacturers.

This just showed up in my email from Babylon 5 Scripts: 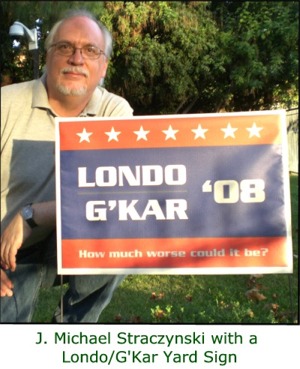 From JMS’s Cafe Press store (the same site through which he’s selling his script books with commentary):

With the coming 2008 elections, there aren’t a lot of candidates we can agree upon. So as a public service, we are now providing a slate of candidates that will bring the country together in common cause and preserve many of this nations’ finest electoral traditions.

I remember having an unofficial Sheridan/Ivanova ’96 (or possibly Sheridan/Delenn) bumper sticker, but I’m fairly certain it was a homemade “Elect The Brain” (as in Pinky and the…) sticker that I actually put on my car that year.

Now if only they’d used the correct punctuation on the ’08 instead of trusting smart quotes. (That should be an apostrophe, not a left single quote.)