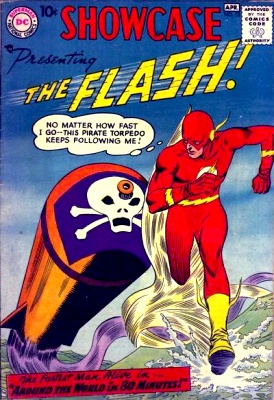 From Showcase #13, it’s “Around the World in 80 Minutes,” a tale of the Flash. (Mostly he runs around the world, helps people out, and gets kissed by women. Aye, it be good to be a superhero.)

(Cover via GCD. This story appears in Showcase Presents: The Flash vol.1 and The Flash Archives vol.1.)

Newsarama reports that during the Q&A part of the DC Nation panel at this weekend’s Baltimore Comic-Con, a fan asked:

Are there more Legion, Flash or Justice League Archives coming? [VP of Sales Bob] Wayne said that when you get up to the issues that can be affordably bought by collectors the demand for the Archive Editions goes down.

Okay, this might apply to the Silver-Age material. The four Flash Archives books so far are up to Flash #132 (1962). When I was tracking down back-issues in the #133–140 range (the likely contents of a hypothetical book 5) about 6 or 7 years ago, I seem to remember finding reasonably good copies in the $5-15 range. (Better copies, of course, run into triple digits.)

Moreover, those 8 years include the first appearances of every major Golden-Age Flash villain. END_OF_DOCUMENT_TOKEN_TO_BE_REPLACED 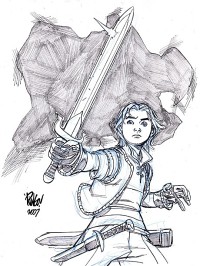 The Mark Waid/Mike Wieringo run on The Flash was one of my favorites. Even though other artists drew Wally West for longer, it’s “’Ringo’s” take that I always associate with the character. That run got me interested in Tellos, which sits alongside Chronos and Chase as a favorite series that should have lasted longer than it did. END_OF_DOCUMENT_TOKEN_TO_BE_REPLACED

Superman, Batman, and Max Mercury have all been cited as giving comic-book speedster Bart Allen the name Impulse. Batman most famously in Impulse #50, and Superman just recently in the previews for next month’s All-Flash #1. But who named him originally?

The name first appears on the cover of Flash #93 (August 1994), with an out-of-control Bart Allen fighting the Flash. The cover is captioned, “Brash Impulse!” Over the next few issues, Wally West’s inner monologue refers to Bart as being impulsive, or (at one point) as “Mr. Impulse.”

It first appears on-panel as a name in Zero Hour #3 (September 1994), when Bart meets Superman for the first time, but Bart introduces himself as Impulse. Dan Jurgens writes. END_OF_DOCUMENT_TOKEN_TO_BE_REPLACED

While looking for something in Flash: The Fastest Man Alive #1, I noticed something interesting. END_OF_DOCUMENT_TOKEN_TO_BE_REPLACED