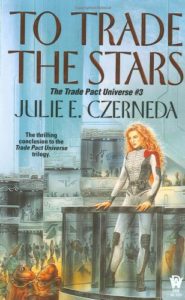 Yesterday I finally had time to finish reading To Trade the Stars, the final book in Julie E. Czerneda’s “Trade Pact Universe” trilogy. Now I’m ready to pick up The Briar King again, since the final book of Greg Keyes’ fantasy quartet, Kingdoms of Thorn and Bone, comes out at the end of the month. When the second book came out, I didn’t reread the first. But when the third book came out, I found it extremely helpful to reread the first two books. 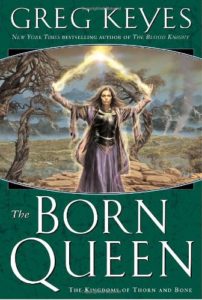 I was hoping to time things so that I’d be done with The Blood Knight just in time to pick up The Born Queen, but I was in the middle of the Trade Pact books and didn’t want to break up the trilogy. Then there was the trip to San Francisco, WonderCon, and New Frontier, and I’ve spent the last two weeks trying to post things while they’re still current.

On a related note, I stumbled across Ringworld’s Children in Borders the other day. I read a lot of Larry Niven in college, mostly the classics plus a few from the 1990s, but after The Burning City bored me to tears—I never finished it, which is rare for me—I stopped following his new releases. I’m going to have to return to Ringworld at some point, though.

Another Geek Hierarchy. This one, instead of focusing on how geeks of all stripes rank themselves, portrays the way “mainstream society” ranks geeks. I appreciate that it includes sports geeks. I’ve never understood why it’s considered acceptable to paint yourself blue, wear cheese on your head and giant foam gloves for a sports team, but wearing a Star Trek uniform makes you an outcast. (via sclerotic_rings)

And several links found during a recent Wikipedia binge:

Diagram of video resolutions, many of which I had no idea had actual names.

Next time we go to the Bay Area, I want to check out the Computer History Museum.

TV Guide has a list of when TV shows are coming back now that the writers’ strike is over. (via ***Dave)

So, what’s happening to the shows we watch?

Returns April 4 with first half of 20-episode final season. Production on second half could start as early as March. Airdate for those TBD.

Seeing as how we don’t currently get the Sci-Fi Channel (we discovered BSG through DVDs), this means it’s time to figure out whether to mess with cable/satellite, watch it at someone else’s place, or hope that they’ll continue offering episodes online through iTunes or something.

No new episodes expected until fall.

Pretty much expected that, given the way they were talking at the end of the “fall season.”

No new episodes expected. Ever.

And I continue my history of discovering interesting TV shows after they’ve already been canceled. (Actually, I have an even longer history of this with comic books. The first comic I ever bought, back in 1984, was issue #19 of Captain Carrot and his Amazing Zoo Crew, which lasted 20 issues.)

TV Guide interviewed Carlton Cuse on this recently (via aeryncrichton). They’d already shot 8 episodes of the 16-episode season, and plan to condense the second half of the season into 5—presumably because that’s how many they can actually finish during this production season.

This could actually work out well for them. One of the reasons season 4 of Babylon 5 was so good (aside from paying off on 4 years of setup) was that JMS shifted up his timetable so that he could wrap up the foreground plotlines by the end of the season he knew he had, instead of ending with a cliffhanger and hoping he could wrap them up in the first third of a season 5 that looked increasingly unlikely. The result was an extremely intense season that is widely regarded as the best year of the show.

And let’s be honest, Lost hasn’t exactly been known for compressed storytelling.

On the other hand, there’s the last few episodes of Angel to consider as a counter-example.

No new episodes until fall.

On the plus side, this means it’s actually been renewed! This had “Too good to last” written all over it!

I’m honestly not sure how I feel about this one. I enjoy it while I’m watching it, and it’s much, much better than Terminator 3, but I don’t find myself looking forward to it between episodes. Even if it does have Summer Glau beating people up.

The Beat has a couple of follow-up posts on the San Diego Comic-Con hotel issue: first, a wrap-up of the experience, then a post that puts San Diego into perspective, what makes it different from cities like New York or Los Angeles, and why just moving to Las Vegas won’t solve everything.

And, for the WTF-worthy, there’s Computer Love Day. As Mandriva puts it in their mailing:

Valentine’s Day is nearly here… February 14th, 2008. But think about it, who do you hang out with, who shares the good times and the bad ones, who drives you crazy but keeps your life together?………..Your computer, and it’s time to say it out loud: I love my computer!

So, how appropriate is it that Lee Thompson Young, who played Cyborg on Smallville, would show up in an episode of Terminator: The Sarah Connor Chronicles?