Went to the Los Angeles Comic Book and Science Fiction Convention on Sunday. I’d only been to one before, last June, and it was pretty pathetic. The dealer’s room was sparse, and hardly anyone was in attendance. Or maybe they were all in the movie (IIRC it was a Wonder Woman fan film). All this seen through the context of my search for affordable copies of 1940s-era Flash Comics led to me spending a grand total of an hour there before leaving.

In fact, I wouldn’t have gone back if it weren’t for three things:

With #3, that meant Katie wanted to come along too.

So we got up early (for a weekend), went out to breakfast at Ruby’s and drove up to LA.

I was shocked to see a line to get in. And the place was comparatively packed. I could swear there were twice as many dealers, and 2 or 3 times as many attendees. My best guess is that a lot of people stayed home in June since it was only a month before San Diego Comic-Con.

I cruised the dealer’s room, found some comic book adaptations of The Colour of Magic (1/4) and The Light Fantastic (full set), and a couple of Elric books, looked at what I thought might be the autograph table to see if Bilson and DeMeo were there (the Flash writers), didn’t see them, and joined Katie as we waited for the movie to start.

You see, the actor who does the voice for Beast Boy was signing autographs (and using it as a way to collect money for PETA — you got an autograph by making a $2 donation). They wanted everyone in line to get an autograph. He wanted to keep reminding people that they really should pick up some of the PETA literature he had up front.

The movie was supposed to start at 12:30, and didn’t get underway until at least 1:00. Fortunately it was a lot of fun… until 45 minutes in, when the DVD started skipping and catching. And no one did anything about it. The guy sitting at the control table, as near as anyone could tell, wasn’t even trying to do anything. After a few minutes — yes, minutes — of this, people started leaving in earnest.

I decided to make one more circuit and see if I could find the main autograph table, and it turned out that it was the table I thought, and I just hadn’t recognized them (one of them did most of the talking at the Comic-Con panel I went to, and he shaved off his beard between then and now). I spoke to them briefly, got them to sign the new Flash #1 and the Flash TV Special from 1990. (They were really impressed at the condition it was in, and asked where I got it. I explained that I’d picked it up when it was new, and kept it that whole time.)

About this time the people running the movie finally got around to fixing, cleaning, or whatever they needed to do to the DVD, so we got to see the rest of the movie.

Trouble in Tokyo was very good. The story was a bit predictable in places, but it kept up a manic pace and had tons of humor. There was a travel montage early on that was just one joke after another, and some drop-down-funny parts scattered through the film.

The one that practically had us on the floor was in a sequence with a sushi chef trying to convince Cyborg to leave his all-you-can-eat restaurant by handing him ever-more-ridiculous dishes.

We still left after maybe 4 hours, but it was an interesting four hours!

I’ve seen a grand total of one episode of Smallville. It just never interested me. The one I watched was last season’s “Run,” which featured the Flash as a guest star.

Apparently Aquaman showed up earlier this year, and there’ve been rumors about the Teen Titans’ Cyborg. The Pulse reports that Lee Thompson Young will play Vic Stone in the February 19th episode.

Looks like I’m gonna be watching another episode of Smallville.

Teen Titans #30-31 will feature the long-awaited* return of Captain Carrot and His Amazing Zoo Crew! It seems that Kid Flash is a fan of the series, which never actually got canceled in the DC Universe, and has gone grim-n-gritty with the rest of the DC line. “Excerpts” of a Zoo Crew “parody of Watchmen and Dark Knight and their fallout” will be interspersed with the regular story.

While grim-and-gritty doesn’t seem to go with Captain Carrot, parody does. And to think, I was this close to dropping Teen Titans. It looks like I’ll be staying on a few more issues.

*OK, long-awaited by some. Let’s just say it was Captain Carrot that got me into comics at the age of seven, so there’s a serious nostalgia factor at work.

A recent post on What Were They Thinking? reminded me of a panel from the original Teen Titans series. In it, Robin and Wonder Girl have just been gassed and tossed out of an airplane, waking up in mid-air. 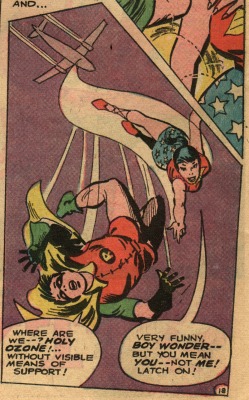 Yes, Robin once uttered the words, “Holy ozone!” And, like the “holey rusted metal,” the words proved accurate in an entirely different way. This was Teen Titans #7 (1967), the issue which introduced the Mad Mod. (Think of him as Austin Powers as a villain.)

Who knew comics could be so prophetic? 😉

There are two books I picked up recently that demonstrate how not to tell a story with pictures: Teen Titans #27 and the manga of The Nightmare Before Christmas.

First, Teen Titans #27, first half of a two parter by fill-in team of Gail Simone and Rob Liefeld. I’d planned on writing a more thorough review, but Comics Should Be Good beat me to it. And yeah, reviewing Liefeld’s art feels like a cheap shot, but sometimes ya just gotta go for it. Simone’s story isn’t bad, but it’s hard to follow. In particular, there are too many places where the art isn’t about story or action, it’s about showing the heroes or villains in dramatic poses. And yeah, you want the occasional dramatic pose, because you want to show off the costumes. That’s part of the genre. But you need to convey what’s actually happening. As dramatic as the last two pages were, I couldn’t figure out just what Kestrel was doing without looking at the “Next issue” blurb!

And then there are the places Liefeld left out dramatic poses that should have been there. The issue introduces a quartet of teen villains, but only one of them gets a full-body dramatic view, two get only action shots, and one—well, let me put it this way. I had to flip back to the beginning to be sure that there really were four of them and not just three. He’s in two panels with only his head and shoulders visible in the entire book. He’s not named, there’s no sign of powers or special skills, and he’s wearing a shirt and tie. I have to wonder whether Liefeld just didn’t get around to designing a costume since the character gets eliminated halfway through the book.

Anyway, onto The Nightmare Before Christmas. END_OF_DOCUMENT_TOKEN_TO_BE_REPLACED