Katie and I seem to do vacations in pairs. We’ll go somewhere on a trip, then a year or two later come back and do all of the things we discovered but couldn’t find time for the first time around. Last April we went to Las Vegas for an extended weekend, did some sightseeing, saw some shows. This year we came back mainly for the shows, and did the trip during the last week of March, driving out on Monday and returning Friday evening. 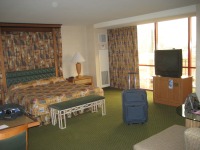 We stayed at the Rio, which has very nice, huge rooms—even if we didn’t spend much time there. The casino floor is also surprisingly easy to navigate, unlike some of the mazes on the Strip. We’re probably the only people to stay there four nights and not to see the “Show in the Sky” (some vaguely Mardi Gras-ish production they do with floats that run on tracks in the ceiling).

Of course, it is a bit off the Strip: 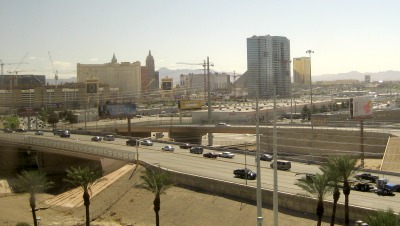 But at least it wasn’t as far off as the last hotel we stayed at.

We managed to catch Spamalot (which replaced Avenue Q at the Wynn), Cirque du Soleil’s O (the one with the water), Penn & Teller’s magic show, and Jubilee! (a traditional-style Vegas extravaganza, and yes, the exclamation point is part of the title). END_OF_DOCUMENT_TOKEN_TO_BE_REPLACED

Whew! We took a few days off for our second anniversary and drove out to Las Vegas last weekend. Neither of us gamble, so it might seem kind of an odd choice, but there’s something else Vegas has a lot of: shows.

We also got to see how much Las Vegas had changed since the last time we were there, back in 1998. The hotel we stayed at last time (the Holiday Inn—we were college students on a budget) has been bulldozed. Several gigantic hotel/casinos have opened on the strip, and more off.

And for some reason, I don’t remember noticing all the mountains in the distance last time. Maybe it was too cloudy or hazy, or maybe it was just that we stayed off the strip this time and weren’t surrounded by buildings.

So… a week in Hawaii. I guess the main thing to remember is that it is the “big island.” It can take 2½–3 hours to get from one side of the island to the other, and that’s without stopping to see anything along the way.

We stayed in Kailua-Kona, and ended up spending most of our time on that side of the island. Part of it was that, since it was basically a long-delayed honeymoon, we figured we’d splurge on a few tours. So one morning was taken up by a submarine tour through the bay outside Kona, an afternoon was taken up by a whale watching cruise on a catamaran, and an entire afternoon and evening was spent on a trip to the Mauna Kea summit.

Highly recommended guidebook: Hawaii: The Big Island Revealed. It’s written by people who actually live on the islands and just explore them constantly, and they have a very engaging style that will have you reading sections about places you aren’t even planning to go.

We did decide that if we were to stay in Kona again, we’d try to stay closer to town. While the Keauhou Beach Resort has a lot on its grounds—a restaurant, tide pools with sea turtles, a beach, some shops, and even a couple of historical sites including some heiau (temple) ruins—it was too far from Kailua proper. Kailua-Kona (the names seem to be interchangable) is a classic beach town—only in Hawaii—and parking is cramped, expensive, and limited, so you want to walk as much as possible without having to get back to the lot and move your car every two hours.

We didn’t get to see much of the Hilo side, partly because of the tours, and partly because we got back so late from Volcano National Park one night that we couldn’t wake up in time to go anywhere the next day. (Tip: Drive to Volcano Village, fill up the tank, and then enter the park. Otherwise you’ll be searching for an open gas station in the middle of the night, and there really isn’t much between Volcano and Kona, unless it’s off the main highway.)