Well, it took 2½ months during which I took breaks to read at least three other books, but this weekend I finally finished the first book of George R.R. Martin’s fantasy epic, A Song of Ice and Fire: A Game of Thrones. 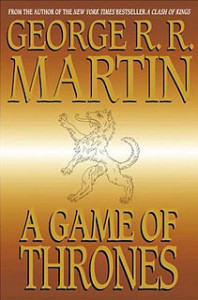 By all rights I should have liked this book. I frequently like big epic fantasy: J.R.R. Tolkien’s Lord of the Rings, Greg Keyes’ Kingdoms of Thorn and Bone, Robert Jordan’s Wheel of Time. Actually, Wheel of Time is probably the best comparison, given the sweeping scope of the series, the number of viewpoint characters, the emphasis on political intrigue, and the length of the books.

On the other hand, no Robert Jordan book has taken me longer than a month to read.

About a year ago, a friend recommended the books to Katie, and gave her the series so far (4 books) for Christmas. It took a while before she got to them, but when she did, she tore through them in about a week. (It helped that she had the free time.) She recommended them to me, but I didn’t pick up the first book until sometime last November.

And I just couldn’t get into it. The characters I found most interesting seemed to get the least attention. Of those, one character’s chapters were difficult to read because she’s in the wrong genre: a girl of 10(?) who wants to grow up to be a warrior princess in a world that would casually kill her before she had the chance. And while I’m sure it’s a matter of morally gray=interesting, it’s basically “Kingdom of A—holes” (maybe not as poetic as “The Knights Who Say F—” but more accurate, at least for the first book). The only adult character who isn’t morally gray or worse is so stuck on honor that he can’t handle the compromises necessary in politics. So it’s not so much a question of who’s the best choice to be in charge, as who’s the least bad.

The first book is about 95% straight medieval-setting political/military drama, with hints at supernatural elements here and there. The prologue sets up an otherworldly menace that is subsequently ignored for most of the book, there’s the occasional sword described as magic, it gradually becomes clear that the dragons are a historical fact, rather than legends (the previous king had dragon skulls mounted along the walls of the throne room) and that seasons frequently last years. “Winter is coming” is a key phrase, and the motto of the family that provides all but two of the viewpoint characters.

After 400 pages of tedious setup establishing just how brutish, brattish, or manipulative everyone is, things start going off the rails. And boy, do they go off the rails. You know how, when reading a book, you get to a point where you figure it can’t get worse? It does. Repeatedly.

About 200 pages from the end I decided I was going to make an effort to finish the book and get it out of the way. So I had a marathon reading session one Sunday, then made an effort to read during lunch over the next week, and then finally finished it over this past weekend. (For contrast, with each of the first two or three Wheel of Time books, when I got within 150 or 200 pages of the end I had to finish, even if it meant staying up until 2am on a work night.)

Actually I guess it’s kind of like some of the later Wheel of Time books in terms of sheer detail and trudgery. Except those have the advantage that you’ve probably read the earlier ones, which were quite good. (I’ve often described the WoT series as 5 novels of one book each followed by one novel that spans 7 books.)

The last 50 pages or so, particularly the final chapter, are considerably more interesting. If it had stopped at 750 pages, I’d probably be inclined to just leave it there, but I might actually pick up the second book at this point.

Just not now. For now, I’m picking up Julie Czerneda’s stand-alone In the Company of Others.

3 thoughts on “Finally Finished “A Game of Thrones””