Discussion has erupted over a teaser image that DC Comics has just released for an upcoming crossover between Countdown and The Flash: 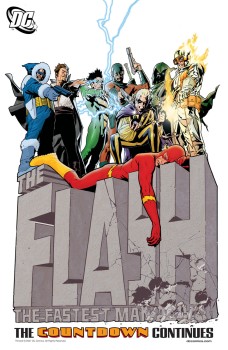 The image, with the battered Flash at the mercy of his Rogues Gallery and his name shown in giant stone letters, has been widely recognized as an homage to the classic Flash v.1 #174 cover by Carmine Infantino & Murphy Anderson (1967). What you may not know is that it’s not the first time that cover has been referenced. In 1989, Mike Mignola revisited the cover for Secret Origins #41, featuring the origins of the main Rogues. 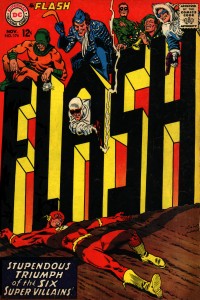 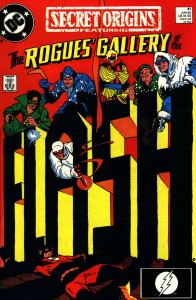 I have a list of 26 Flash cover homages online. Aside from this, there was at least one in Rogue War, and people have pointed out a few that I’ve missed.

Meanwhile, does anyone know who did the art on the Countdown image? My first thought was Brian Bolland, but on seeing the full sized image it doesn’t look like his style. Edit: It turns out it’s Ryan Sook.

Update: Wizard has an interview with Marc Guggenheim [archive.org] on the significance of the teaser, and the relationship between Countdown and Flash: The Fastest Man Alive.