So, the real cover for the upcoming Flash: The Fastest Man Alive #13 was revealed at Heroes Con this weekend. Things don’t look promising for Bart, especially since there’s a history of Flashes dying… but let’s remember there’s also a history of Flashes (and supporting cast) appearing dead on the cover, but still making it through the issue. The full cover—and more than 20 examples of dead Flash covers—appear below. 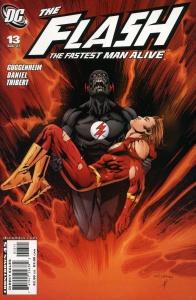 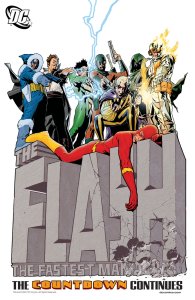 I went through the galleries at the Grand Comic Database for the 1959 and 1987 series, and managed to find no less than 23 covers on which the Flash, or a member of his supporting cast was depicted as dead, but managed to survive the story. Sometimes the events took place, but the character survived, or it turned out the body was someone else’s. Sometimes they were what I call “CPR deaths,” in which the character is technically dead, but not beyond the help of modern (or in comics, slightly ahead of modern) medicine. Generally they’re resuscitated in the following issue. And some are just plain misleading.

Hover for a description. Click to open the issue’s page at GCD.

Update: It’s Monday, and spoilers for the actual issue are starting to hit the message boards. Please DO NOT post any here. I’m waiting until Wednesday when I can read the book. Thank you!

Update 2: Added one cover from Impulse.

Update (June 25): I just discovered that Comic Coverage did a similar feature on The Many Deaths of Barry Allen last year.