We went out to see Kooza last Thursday (January 21) during a lightning storm, (which was a bit of a story by itself). 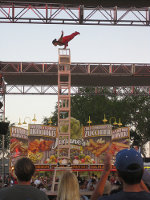 The show was impressive. I think this is the sixth Cirque du Soleil show I’ve seen and they’ve all been good. A few acts did look kind of familiar, like the guy balancing on a 20-foot-tall tower of chairs (we’d seen a similar act at the OC Fair last summer), but even those acts maintained the “how the heck do they do that?!” factor. A contortionist act reminded me of someone’s idea back in the early 1990s, never realized as far as I know, to get contortionists to play non-humanoid aliens on science-fiction shows. (These days, you can just use CGI to portray any body structure you want.)