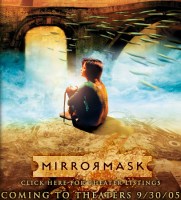 Neil Gaiman and Dave McKean’s fantasy film MirrorMask opens tomorrow in limited release. Inspired by such classics as The Dark Crystal and Labyrinth, MirrorMask tells the story of Helena, a girl who wants to run away from the circus and join real life, but gets trapped in an otherworldly realm separated into kingdoms of light and dark. I, uh, may have mentioned it before a few times… 😉

Word is that if the movie does well enough this weekend, Sony is considering giving it a wider release.

The Beat has a nice run-down of the film [archive.org]. The AV Club has interviews with Gaiman and McKean, and Time magazine has an interview with Gaiman and Joss Whedon, who has his own film coming out this weekend. (Gonna be busy!) Neil Gaiman’s own blog links to more press.

Oh, yeah, one more thing to do this weekend: Stop by a bookstore and pick up Anansi Boys, which apparently hit #1 on the New York Times Bestseller list. Somehow, despite reading about all the signing tours, I had it in my head that it didn’t come out until next month. But Gaiman is one of the very few authors whose books I buy in hardcover instead of waiting for paperback.