I ordered tickets for an upcoming production of The Phantom of the Opera (the Andrew Lloyd Webber musical) and something occurred to me: In all likelihood it’s going to be an exact replica of the 22-year-old London production (with a few concessions to the realities of touring). When did this start happening? 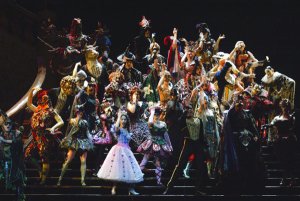 Most of the time when someone puts on a play that’s been done before, they take the script and do their own thing with the sets, costumes, and performances. This is generally true with older musicals as well; people generally aren’t worried about seeing the original staging of, say, The Sound of Music. But these days, when a big show goes on tour, audiences expect the same experience they’d get on Broadway or in the West End.

Les Miserables opened in London in 1985, went through some tweaks on the way to Broadway, and then every production worldwide for the next 10 years was identical save for cast and translations. They retooled the show for the 10th anniversary, and those changes stuck around until they decided to cut it so that they wouldn’t have to pay the orchestra overtime.

Same with Miss Saigon: opened in London, tweaked as it went to Broadway, then frozen until 2003, when it was retooled to make touring simpler (fewer sets on palettes, using a projection of a helicopter instead of a model on a boom, etc. And let me tell you, watching a show about the Vietnam War during the week leading up to the Iraq War was an odd experience.)

It’s probably been 10 years since I saw Phantom (not counting the movie, about which the less said, the better), but I’ll be surprised if it’s much different (aside from cast) than the last time. I’m sure that’s what the rest of the audience is looking for, after all.