I don’t think I’ve seen this one in the wild, but variations pop up on Spam Or Not from time to time. 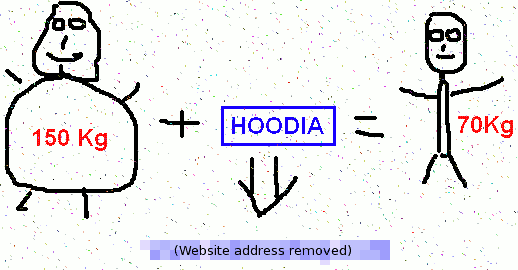 I’ve obscured the website address, though I’m sure it’s been replaced by now.

Seriously, how can you look at the combination of poorly-drawn not-quite stick figures (probably done with a mouse in Microsoft Paint) with the visual equation demonstrating the supposed effects of a diet supplement and not laugh?

Edit: I’ve realized why I haven’t seen these in the wild: We use the MSRBL-Images signatures in our spam filter, and that list is built using ratings from Spam Or Not.

Edit 2: Both the filter signatures and the rating site seem to be gone now, so a little background: MSRBL-Images was a list of hashes that could be used to identify images that were repeatedly used in spam. Spam or Not, inspired by the infamous Hot or Not site, was their way of crowdsourcing the data. The site would show an image that had been collected, and you could mark it as spam or not, and some threshold or percentage of spam ratings would cause the hash to go into their signature list.