Last month I finally got around to a major rebuild of my computer, something I’d been meaning to do since May when I traced some display problems to the motherboard*. I finally bit the bullet when I started seeing signs of disk errors, and dragged the machine into the present day. (64-bit, dual-core, 2 GB RAM, SATA drive, faster everything.)

Then I discovered that some of the display problems actually were the fault of the monitor. 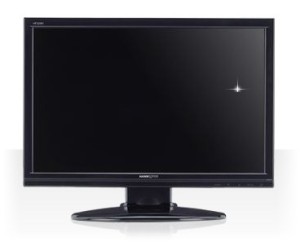 So I went out and bought a new monitor while Fedora was installing, and I took the opportunity to go widescreen.

There was a Dell right next to it, same size & resolution and comparable specs, and the Best Buy employee had been talking both of them up. The Dell was on sale for $290. I asked what the difference was. He thought about it for a few seconds. “Well, this one [the Hannspree] does run a little bit hotter. But mostly it’s just the name.” Thank you, Best Buy employee whose name I’ve forgotten, for helping me save $100.

The biggest difference, aside from actually having room to show both the toolbox and document windows on GIMP, is that I don’t maximize windows anymore. Not that I maximized apps that often before, not counting the stuck-in-low-res period. I’ll occasionally run a video or slideshow fullscreen, but the only program I regularly maximize is my email client, and that’s because I can put it in three-column mode (Folder tree on the left, mailbox listing in the middle, message content on the right).

Something to watch out for: At first I left the monitor off-center, because there wasn’t enough room on my desk for it. I figured as long as I worked mostly on the right part of the screen I’d be fine. But I ended up having neck problems shortly afterward, and Katie suggested I check the placement of the monitor. I shifted things around so I could center it, then set it on top of an Amazon box to raise it a couple of inches, and the sore neck cleared up.

I’ve only run into two problems (not counting the placement): There’s one dead pixel, but it’s off in a corner so that it’s not really an issue. I almost didn’t notice it at first when I was still setting things up, because the default GNOME layout has a Mac-style ever-present menu bar, and it falls right on the edge. Usually it ends up either on the edge of a window border or lost in the wallpaper noise.

The other problem: the built-in speakers pretty much suck, but I had external speakers already, so again: no big deal.

* It stopped displaying any resolution past 1024×768. I could tell it wasn’t the monitor because it was perfectly happy to show another computer at 1280×1024. And not the drivers or OS because I had the same problem booting from a LiveCD. And not the video card because plugging in another one didn’t solve it. This was particularly frustrating since it was an LCD monitor, so running at less than native resolution made everything blurry. Still, I put off replacing the mobo for months since it’s such a pain to do.

One thought on “Gone Widescreen”