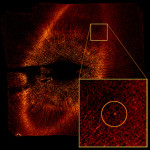 I remember being bowled over when astronomers first detected planets around other stars. Now they’ve actually managed to get pictures!

Of course, they’re about as detailed as pictures of the stars at a science-fiction convention panel taken from the back of the room, or the band on stage from the upper-top-fifth-tier seating (see! that dot there is so-and-so!), but still…it’s a start.

There’s one photo from Hubble of the planetary debris disc around Fomalhaut, with a little dot that apparently has been tracked in other images, consistent with being in orbit around the star. It’s estimated at being about the size of Jupiter and about four times as far out from its star as Neptune is from the sun.

Meanwhile: consider that we can see something the size of Jupiter even though it’s 25 light years away!

Then there’s one from the Gemini North telescope that has actually caught two planets in orbit around a star called HR 8799 — a photo of a planetary system!

Update: Hubblesite has more on Fomalhaut including this image showing Fomalhaut B’s location in 2004 and 2006: 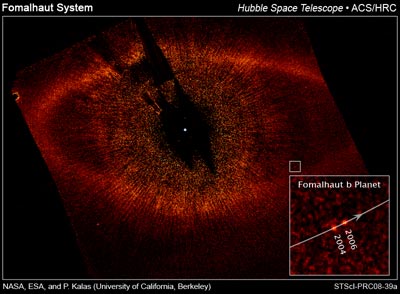