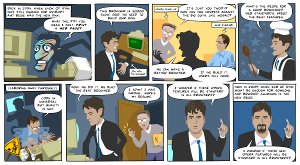 Hard to believe Opera has been around for 15 years. It’s only 14 since its first release, but 15 years ago two programmers started the project that became the Opera web browser.

I’ve been using Opera off and on for about 10 years. I think it was 1999 when a classmate showed me Opera 3.6, and how fast and small it was. (This was back when the installer fit on a floppy disk — and back when that actually made a difference.) I’ve followed it as they expanded from Windows onto Mac and Linux, onto high-end cell phones with Opera Mobile, and finally onto every Java-capable phone with Opera Mini. I’ve watched as they went from trialware to ad-supported to freeware business models. And while the desktop browser is no longer the speed demon it used to be, it’s been a consistent innovator in terms of both browser features and web capabilities.

So I’d just like to say: Happy 15th birthday, Opera! Just think, in a year, you’ll be old enough to drive!*

*In California, anyway. I think in Norway the driving age is 18.