Last week I installed Ozh’ Spam Magnet Checker. It’s a WordPress plugin that looks through your spam folder, groups the spam comments by post, and shows you a pie chart of the posts that attract the most spam.

Aside from satisfying curiosity, it can give you an idea of what types of posts spambots like on your site. Also, if you find a particular post tends to get lots of spam but hasn’t received legitimate comments in a long time, you can close comments on that post, cutting off the chance that something might slip through the filter.

I ran it for a week here on K-Squared Ramblings and Speed Force. (It looks at the current spam folder, which I usually clean out every time I check for false positives, so I had to let it sit for a while.) 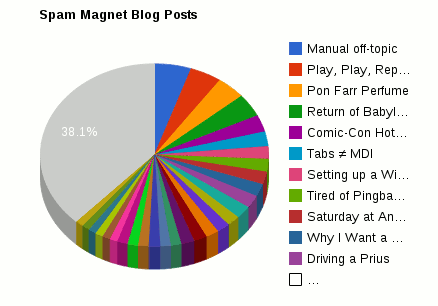 I was sort of hoping for something more obvious, but instead it’s a fairly smooth distribution. The top posts don’t get that much more spam than the next tier, or the next after that. Though I’m kind of surprised to see the Babyon 5 Lost Tales post so high on the list.

At first glance, the chart for Speed Force looked even smoother. The top post only accounted for 2.3% of the week’s spam. 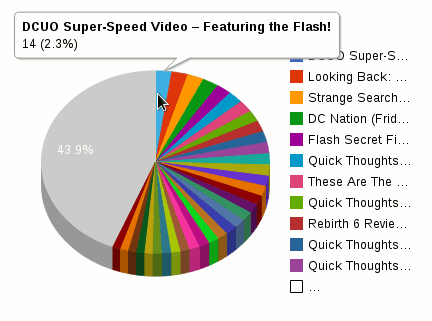 Then I looked down the list. See all those posts starting out with “Quick Thoughts…”? Those are all old Twitter digests, back when I was still archiving them. They’re a mix of old links and old time-specific remarks, and chances are that any useful comments were made more than a year ago — on Twitter, before they were imported. All together, these old Twitter digests were pulling in 16% of the spam targeting Speed Force, on a class of posts that only made up 6% of the archives.

A nice trick, considering I had already closed comments on all of them. It turns out, spammers have been sending trackbacks to these posts. I’d never really noticed the pattern before, but now that I know, I can close pings on them as well.

That was the main thing I discovered by giving the plugin a week’s worth of spam. YMMV.

(Tip of the hat to Weblog Tools Collection for pointing me in the direction of this plugin!)