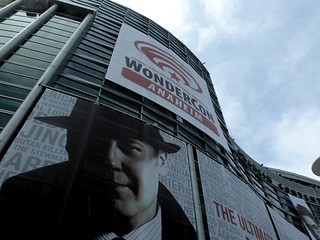 WonderCon is settling in at Anaheim. The crowds are coming even on Friday, and parking…well, it’s not perfect, but it’s better than the first year, when they sent people out to Anaheim Stadium for overflow, and a lot simpler than San Diego’s collection of dozens of tiny parking lots scattered around downtown. After the first day following signs from lot to lot to lot, I just went straight to the Garden Walk structure for the next two days. It’s a bit of a hike, but not much worse than parking at the far end of the Toy Story lot, and the time you save waiting to get into the lot will probably make up for the extra 5-10 minutes on foot. (But if you leave the con before sunset, make sure you walk out to Katella along the convention center, where there’s shade, and not along Harbor, where there’s a wide street to let the sun reach you and a wall to reflect the heat right at you.) 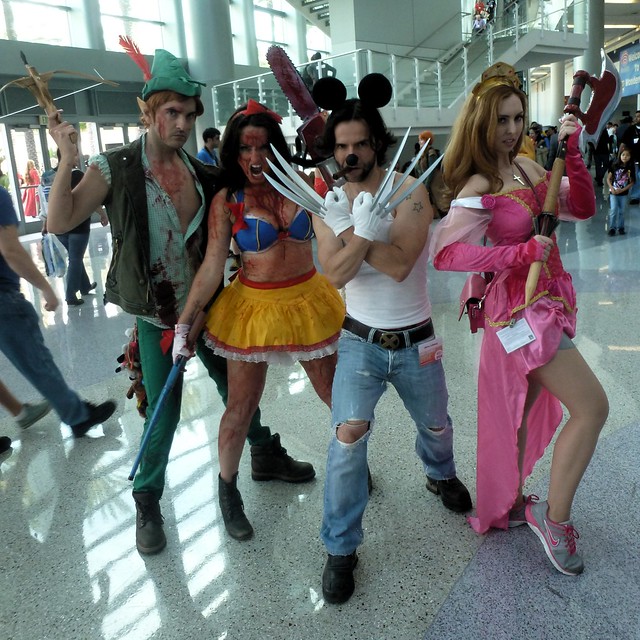 I will say I was impressed with the food trucks they brought in for lunch. They were much better than the convention center food, and the wait was probably shorter than the wait for the tiny food court at the Hilton. 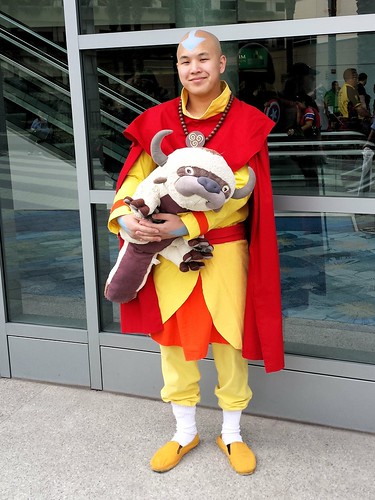 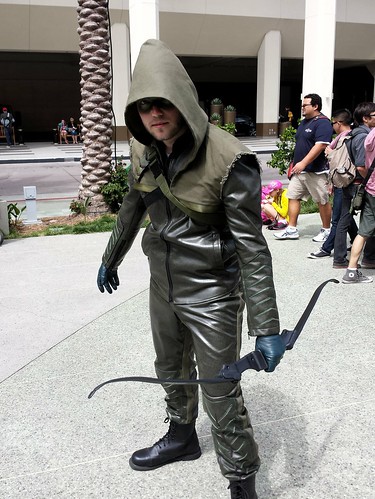 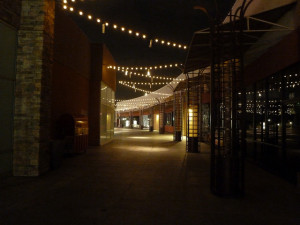 Friday I attended solo, and spent the afternoon exploring the floor, trying to find rare items, and attending one panel that (as these so often do) drifted a bit from its stated topic, which was what makes a remake/reboot work. In the evening I met up with my friend Wayne and we went to see the Revolution panel and the premiere of “Son of Batman.” After that I decided to grab some dinner near where I’d parked, which meant the Garden Walk mall…which turned out to be eerily empty. I ended up at a Johnny Rockets way in the back, surrounded by empty storefronts, an abandoned food court, and a movie theater that I suspect is the only thing keeping the burger place alive. 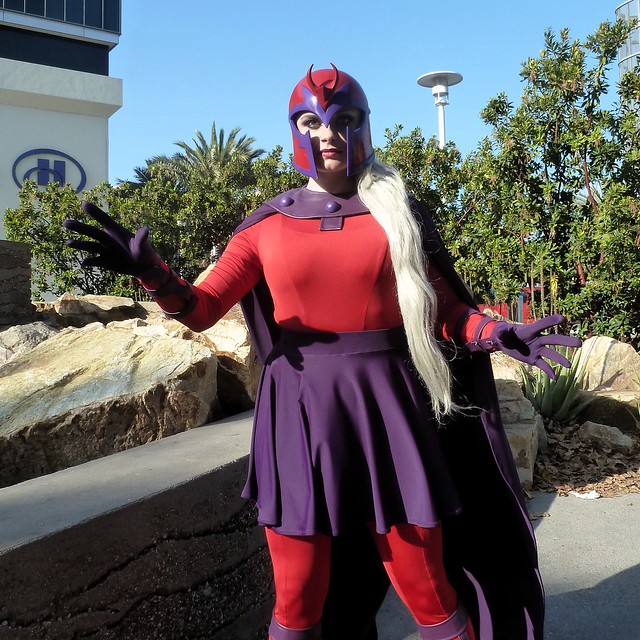 Saturday we all went to the con. (Normally we leave our son with relatives on Saturday and bring him on Sunday, but that didn’t work out this year.) Katie had a bunch of panels on writing and topics related to the story she’s working on, and I hadn’t marked any must-see events for myself, so I spent the afternoon making sure our son actually enjoyed his time at the con.

Three isn’t a great age to attend a comic convention. He’s still too young to appreciate much in the way of panels or browsing the convention floor, but he’s too old to just sit in the stroller all day with breaks to run around. So we had to find things he would enjoy. 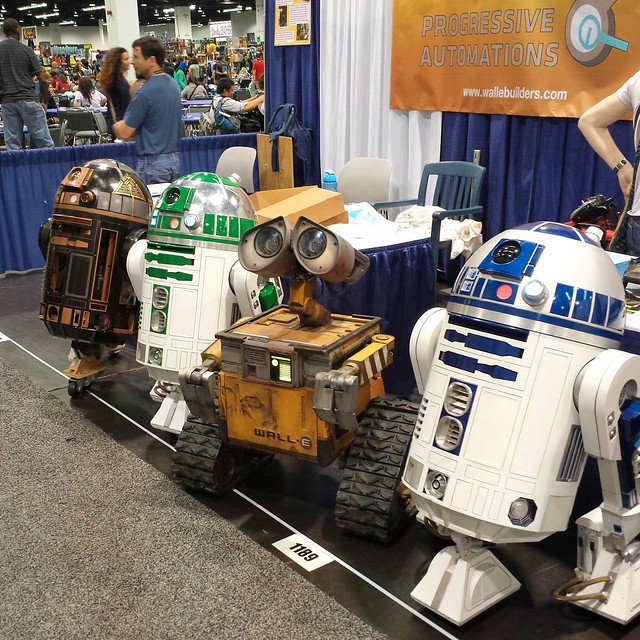 He was fascinated by (and very apprehensive about) the remote-control R2-D2s, thrilled to get a new Pop! minion toy, enjoyed looking at T-shirts (and running around the booth, no matter how crowded). He loved exploring the hallways beneath the Hilton and the grounds outside the convention center — especially the far fountain with all the rocks to climb on! After the main floor had closed for the evening, while we waited for Katie to get out of a panel, I finally let him play with connecting the magnetic cordons that were used for traffic control during the day. The doors were closed, con staff wasn’t objecting, and we made sure to put them back at the end. 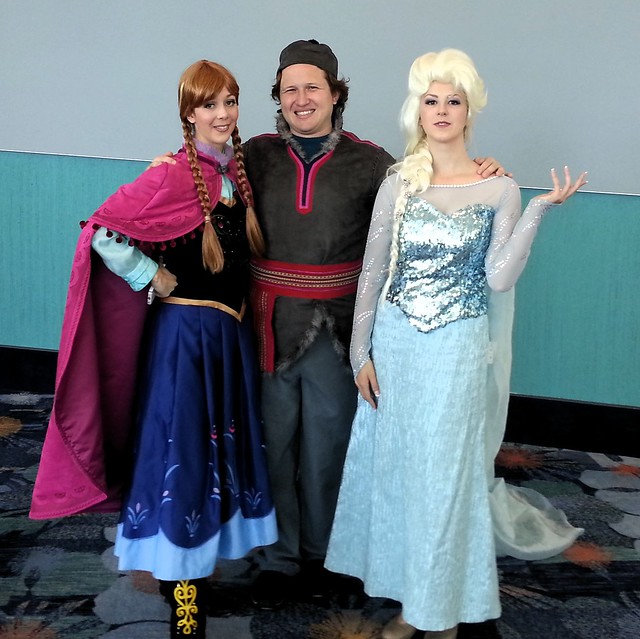 He’s never shown much interest in people in costumes, probably because he doesn’t recognize most of them as specific characters, but this year he noticed the Frozen cosplayers. And by “noticed” I mean “was totally freaked out by.” Elsa and Anna were very friendly, and we all tried to convince him to at least say hi, but he only wanted to hide.

Sunday was a lot more low-key, both in general and because it was just me and Katie. I caught a panel on long-form comic book writing (mainly because it had three past/present Flash writers on there, including Mark Waid, Francis Manapul, and Robert Venditti). Katie caught one on apocalyptic storytelling, and we met up afterward for the post-panel signing at Mysterious Galaxy’s booth, where she got to talk for quite a while with one of the authors. We browsed the floor, looking for random stuff and also components for a costume she’s planning for Comic-Con. 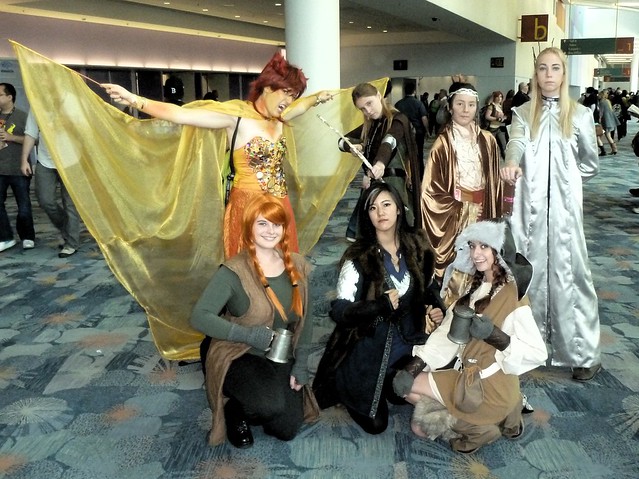 In the end: We saw some great art, found some cool stuff you just won’t find outside of a con (unless someone points you to an off-the-wall website), learned a bit more about what goes on behind the scenes in various media, I got to hang out with a friend we don’t see nearly as often as we should, Katie got a lot of inspiration for her current story, and J got to meet R2-D2 and explore someplace new. Overall, I’d call that a success. 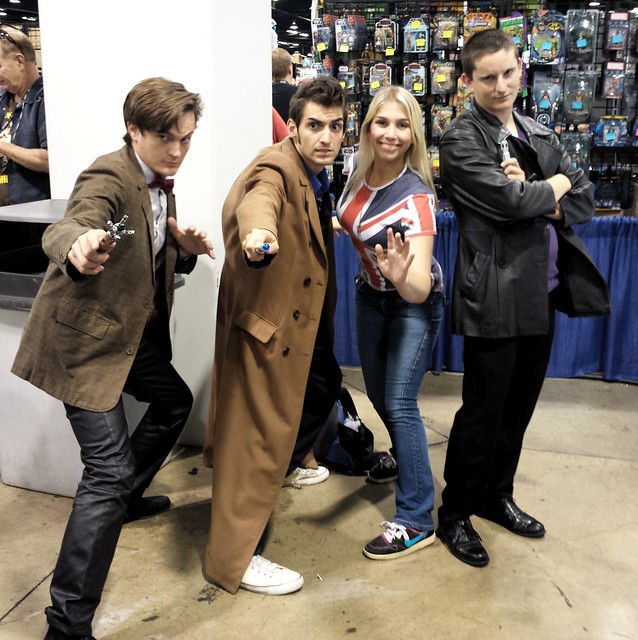