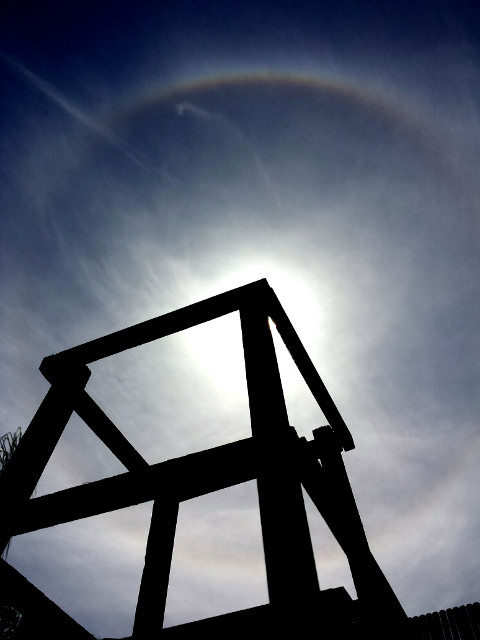 I spotted this great halo yesterday while we were out shopping for plants for a vegetable garden. The bright, colorful upper arc just jumped out, and while I searched for something I could use to block the sun for a photo, I also shaded my son’s eyes with my hand so he could look too.

It was still visible 20 minutes later and a few miles away, when I noticed that the upper arc looked like it split to the left, probably a circular 22° halo with a circumscribed halo around it. That would touch the circle at the top, where it’s brightest, then branch off on tangents to the sides — and it does look like that may be going on even in this shot, on both sides, though I didn’t notice it at the time. Halos like this are caused by reflections in ice crystals, but the ice can be in the upper atmosphere. It was plenty warm down here on the ground, around 80°F.

We did make it out to Mysterious Galaxy for California Bookstore Day (though they only had a few of the exclusives left by the time we arrived — apparently there was a massive rush that morning), but ended up missing Free Comic Book Day. It became clear while we were out running around that J wasn’t going to stand for waiting in line in the heat, and I never quite managed to get back out there myself after the rest of our errands were done. It didn’t really seem that urgent, two weeks after WonderCon (I still need to write that up, but you can check out my convention photos now).