I’m programming with IntelliJ by JetBrains. J. just launched a game by IntelliJoy. Katie is reading an article on BrainJet about Meyers-Briggs personality types, and has just gotten to INTJ.

Yes, all at once.

Follow-ups to two past blog entries.

First, remember on our most recent trip to Las Vegas (last March) we repeatedly encountered a slow-moving, hand-painted truck labeled “Henry’s Moving” on the drive out. Well, after a trip to Fry’s this past Sunday, we spotted it again.

Second, for the first time in 1½ years, I managed to spot Venus in broad daylight again. I went downstairs to grab a snack about 3:20 this afternoon, and noticed the first-quarter moon in the East. Remembering how I located Venus the first time, and already in the shadow of the building, I traced a line from the moon toward the sun, and found it, a tiny white point in the light blue sky. It was almost directly overhead, and just outside the area around the sun where the sky turns increasingly white. I lost sight of it, but managed to locate it again before I went into the cafe, and once more when I walked out.

I probably looked silly, staring straight up at the sky. But hey, how often do you see another planet during the day?

Edit: I went back down a few minutes later and took a photo. It actually showed up, which seriously surprised me. 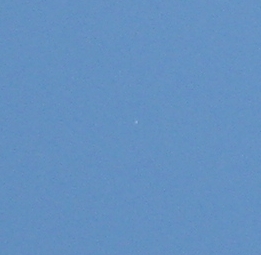