And, well, I did. I’m just not sure what. This was 1:28 pm (33.66 N, 117.75 W), looking roughly southwest, with the sun placed behind a wall to the right. The sun is to the right and above the frame. I don’t have a good sense of distance in the sky, but this is in the right direction to be either Venus or the comet.

Or it could be a passing high-altitude airplane that I didn’t notice.

If it is the comet, the tail is completely invisible, as it should be stretching down to the lower left (away from the sun) and I can’t make anything like that appear with any of the image enhancement tools I’ve tried. 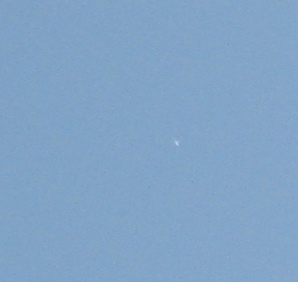 This is unprocessed. All I did was load it from the camera and crop it. And here’s a copy of the whole photo (this was at full ~3x zoom on a Canon PowerShot SD600) with the position of the object and the rough position of the sun pointed out.

The skies were surprisingly clear today. Four of us at work walked outside after sunset to a bridge near the office, and saw Comet McNaught. It was visible from ~5:10/5:15 to 5:28, at which point it slipped below the line of hills to the west.

We saw it against the red sky, slowly dropping through the (fortunately sparse) clouds. It was easily visible to the naked eye as a fuzzy white spot, with a hint of a tail pointing straight up that was a lot clearer in binoculars. The tail looked like a U or a V, fanning out at what looked like (but probably wasn’t) a 45° angle.

Well, my fingers are finally warming up. (I made the mistake of not grabbing my jacket, and went out just in my sweater.) Time to wrap stuff up.

Update January 13: I managed to catch another glimpse of it tonight. Unfortunately I was just arriving at the shop to pick up my car, and it was just closing, so I didn’t have a chance to watch it set (or see much more than a fuzzy white dot.) My watch said 5:02. By the time I got out, it had set beneath the building across the street, and there just wasn’t anywhere nearby enough with a clearer view of the western horizon.

On the plus side, I did manage to spot Venus while the sky was still light, and get a picture. It’s not quite as exciting as spotting it at one in the afternoon, but by adding more blue, you get an idea of what that looked like:

I was looking over the photos I took last night (Saturday) and discovered I could actually find it by messing around with levels. On the left is the original photo, with a little bit of color correction to match what the sky looked like. The background’s still too bright to see the comet, though it was visible to the eye. On the right, I’ve adjusted the heck out of the image, and there’s a very slight bright spot right where it should be (I framed the shot so that the comet would be near the light pole, making it easier to find). Actually, now that I look at it again, it’s just barely visible in the less-processed photo on the left. 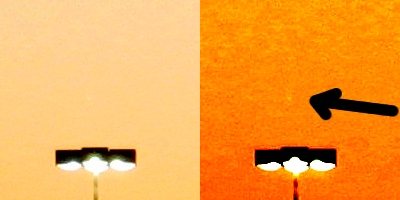 Also, this is cool: the comet has gotten bright enough to be spotted in daylight. (via Slashdot) I didn’t have any luck looking for it this afternoon, but I chalk that up to lower altitude and city haze.

Update January 15: I spotted something today, but I’m not sure what…