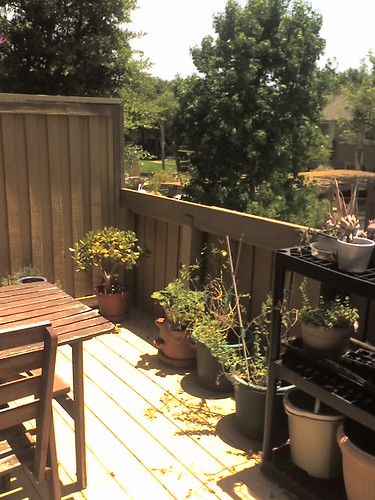 This is a picture I took last summer of the balcony on our old apartment. I used it to test using Flickr’s email upload and blog-posting features to upload a picture straight from my phone.

Unfortunately, it needed cleanup. The title (and post slug) end up being the filename, which I suppose I can fix before sending, and the content seems to get posted twice. I suspect the phone is sending both formatted and plain-text versions of the message, and Flickr is reading them both.

Anyway, it’s not a bad picture, so I figured I’d leave it up instead of deleting the test post.

Maintenance came out that afternoon, realized there were too many bees to handle, and called in the professionals to come out on Tuesday. By Tuesday evening, there were only a handful of bees outside, and we found a half dozen dead on the floor near the window. And, disturbingly, one dying bee stuck in a pool of unidentified goo in a skillet that had been left to dry on the stove.

And that was the end of it, until Katie opened up the cabinet above the stove today, and was greeted by the sight of dozens of dead bees:

They weren’t just in the vent, or the ceiling: if we’d opened that cabinet on Monday, we’d have had a full-on swarm in the kitchen.

Current Music: Tori Amos: Sleeps With Butterflies (which, appropriately, is on “The Beekeeper”)