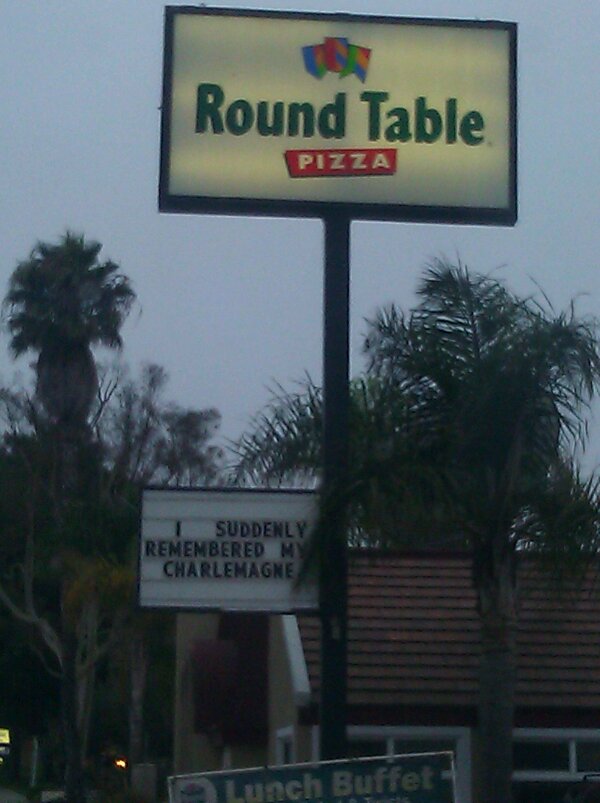 If a professor of medieval studies and Grail scholar wanted to run a pizza parlor franchise, Round Table would be the one to go with. 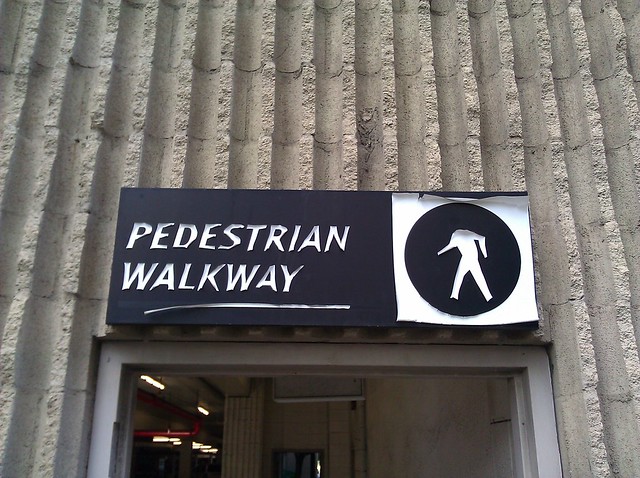 I’m a little concerned about this walkway. Should I go in?

We watched the first disc of The Young Indiana Jones Chronicles last night. The series has been reedited from one-hour episodes into two-hour movies*, and while later episodes may work better, the series opener really suffers from it.

Sure, the original airing combined two episodes with an eight-year story gap in them, but the story of 9-year-old Henry Jones, Jr. visiting an archeological dig in Egypt and the story of 16-year-old Indiana Jones getting caught up with Pancho Villa in Mexico are linked thematically. More importantly, the Egypt segment sets up a mystery (a murder and stolen artifact) that is only half-resolved in that segment. The rest is resolved in the Mexico segment.

For the DVDs, George Lucas wanted to tell everything in chronological order, so the Pancho Villa segment has been moved later in the collection (I’m not sure what it’s been paired with), and the opening “movie” instead jumps directly from Egypt to Morocco, telling a completely different story linked only by taking place on the same continent. It doesn’t help that it was filmed several years later, making it look like 9-year-old Indy has gone through one heck of a growth spurt between stops on his father’s lecture tour.

The segments work reasonably well on their own — well, except for the fact that the Egypt story isn’t actually resolved — but the overall presentation is weaker.

This past week has mostly been taken up by unpacking, at least to the point that we can use things. We got most of the bedroom set up the first night — we needed somewhere to sleep — but the rest has been slow going. We finally got the TV and DVD player hooked up today, and tested it by re-watching Raiders of the Lost Ark.*

One thing I’ve noticed is all the extra expenses that pile up after the move.

You have to replace things lost during the move. I misplaced the screws that held together the bed frame when I dismantled it, so after we moved the last boxes in and got cleaned up, I drove out to Lowe’s looking for replacement hardware. Similarly, we forgot to remove the under-the-cupboard paper towel holder, and had to get a new one.

There are also things you can’t take with you. Stick-on wall hooks in the closet, for instance.

Or things that are included in one place, but not in another. Our old apartment had a built-in lock on its garage storage. At this place, we had to get a padlock. (Well, actually, we didn’t. A day after buying it, I found one in my toolbox that I’d forgotten.) We also had to get a shower curtain rod. Fortunately we have plenty of lamps, but that’s one I’ve run into when moving before.

All this on top of the stuff you expect to pay: rent, deposits, boxes, movers or a rental truck, pizza for friends who are helping, etc.

*Regarding Indy, I had originally planned to re-watch the entire Indiana Jones trilogy before going out this weekend to see Kingdom of the Crystal Skull. But it took a while to empty enough boxes to get the TV set up. We did manage to watch Last Crusade on one of the computers, which was a bit awkward. We went out with friends on Saturday to catch the new film. It was a lot of fun, but not phenomenal. Better than Temple of Doom (which is still better than a lot of films) but not as good as Raiders or Last Crusade.

Ever notice the similarities between Mohinder Suresh on Heroes and Indiana Jones?

No, seriously. His first arc is straight out of Indiana Jones and the Last Crusade.

Both are estranged from their fathers, in part due to the death of a female relative (Indy’s mother, Mohinder’s sister) and in part due to the fathers’ obsessions with their own personal quests (Suresh: evolved humans; Jones: the Holy Grail).

Nonetheless, each pursued his father half-way across the world when that quest got him into trouble.

They both found their fathers’ notes, which had been missed when their homes were ransacked.

Each encountered a female associate of his father, close to his own age, who later turned out to be a spy. Moreover, both women’s first names were four letters long and started with an E (Dr. Elsa Schneider, Eden McCain).

Each shares his name with a family pet. (Indiana Jones took his nickname from the dog. The elder Dr. Suresh named a lizard after his son.)