In the 1940s, comic book publishers would often re-purpose an old series to avoid postal fees for launching a new one. For example, the super-hero book All-Star Comics became All Star Western.

EC’s Moon Girl was infamous. It launched as a superhero title, became Moon Girl Fights Crime! by issue #7, and A Moon…A Girl…Romance with issue #9 as they tried to figure out just what genre audiences wanted. 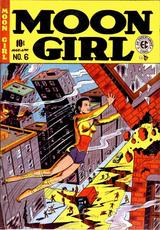 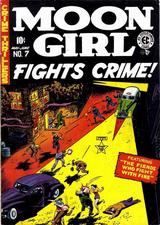 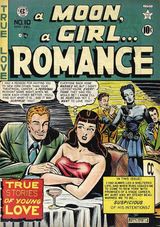 Eventually it became Weird Fantasy, then Weird Science-Fantasy, then finished its run as Incredible Science-Fiction. It ended with the story, “Judgment Day,” an allegory against racism which the Comics Code Authority tried to censor.

I just read that someone’s reviving it. The original super-hero character has fallen into the public domain, and the new series, described as “‘The Dark Knight’ meets ‘Mad Men,” is being published through comiXology’s iPhone comics…60 years later.