I read Shadowpact #2 last night. So far the book does read better than Day of Vengeance, probably in large part because Bill Willingham can set his own schedule instead of the must-be-6-issues policy of the Infinite Crisis lead-ins.

One of the villains struck me as familiar, though: an albino swordsman with a magic sword, apparently allied to a sinister god-like being, who has picked up the nickname, “the White Rabbit.” 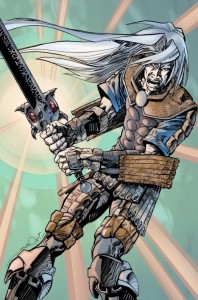 Maybe it’s just the timing—just a few days ago I read a comic about Elric, an albino swordsman with a magic sword, allied to a sinister god-like being, with the nickname, “the White Wolf.” 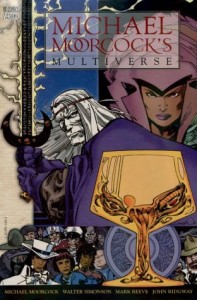 Actually, I was first reminded of Count Zodiac from Michael Moorcock’s Multiverse, largely because Zodiac is based in the 20th century, rather than an ancient sword-and-sorcery landscape. Count Zodiac is one of at least three versions of Count Ulric von Bek*—the others appear in The Dragon in the Sword and the trilogy that begins with The Dreamthief’s Daughter—and, like Elric, an incarnation of the Eternal Champion.

The Eternal Champion in all his forms fights for the balance between order and chaos, and often finds himself fighting for order while indebted to a lord of chaos. At least two versions** of von Bek are albinos who wield the Black Sword (Ravenbrand, rather than Stormbringer), and while I don’t recall Ulric himself being linked to a demon the way Elric is reluctantly linked to Arioch of Chaos, the von Bek family has ties to Lucifer going back to the Thirty Years War. END_OF_DOCUMENT_TOKEN_TO_BE_REPLACED