DC Comics’ April releases have been announced, among them Crisis Aftermath: The Battle For Blüdhaven. (That’s the city Nightwing decided to protect when he went solo, downriver from Gotham and even more corrupt.) But the cover doesn’t make me think of Nightwing, or of Batman: 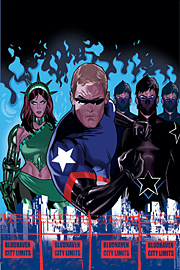 Let’s see, there’s American Maid/Captain Liberty, not sure about the guy in the middle, but the three ninjas on the right sure look like they’re forming a hedge.

Could it be true? Is The Tick coming to Blüdhaven?

OK, they’re actually the Force of July (thanks to the Comic Bloc forums for the ID), but wouldn’t the Tick have been funnier?