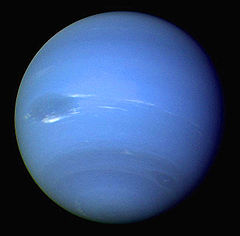 This morning I saw some wavy clouds that reminded me of the patterns you see in pictures of Jupiter. I started thinking about gas giant planets, and had an odd moment of realization: when I was a kid, astronomy books didn’t have actual photos of Uranus or Neptune. They couldn’t have — there weren’t any! There were nice photos of Jupiter and Saturn from the Voyager missions, but Voyager 2 didn’t reach Uranus until 1986, or Neptune until 1989.

The really weird thing, though: modern astronomy books do have photos of Neptune — but the ones for general audiences probably all use the same picture I got as a framed poster when I was in high school. We haven’t been back in 20 years. Jupiter and Saturn have gotten a lot of attention, partly because they’re a lot closer and partly because their ring and moon systems are so fascinating. So we have a more continuous view of those planets and how they change over time.

Neptune? One snapshot (metaphorically speaking) of the planet from 20 years ago. Everything before and everything since then has been done with telescopes. Even the Hubble barely has the resolution to tell that the Great Dark Spot broke up sometime between 1989 and 1994. That’s something that maybe shouldn’t have surprised anyone, given how quickly storms form and dissipate on Earth, but back in 1989 it seemed so much like Jupiter’s Great Red Spot (going on 400 years or longer) that it was easy to think it too would be persistent.

It’s a good reminder that the universe beyond Earth does change with the passage of time…even on a human scale.