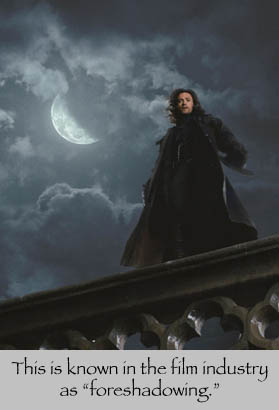 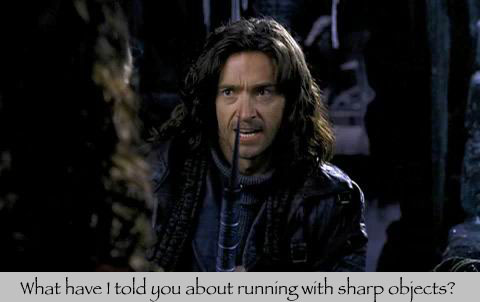 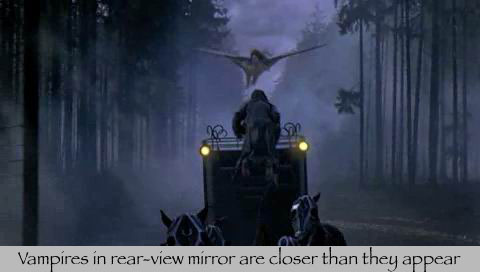 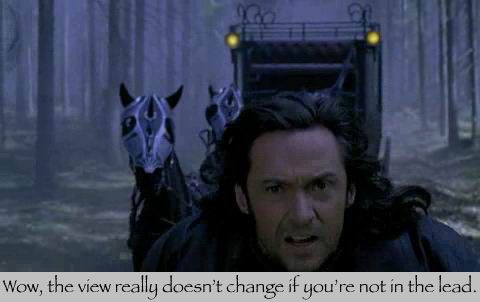 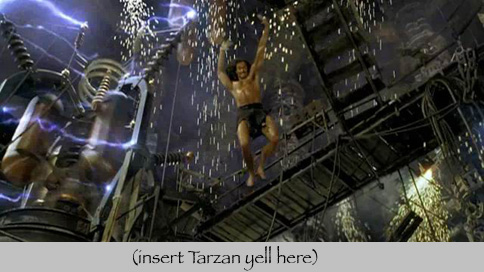 More coming when I find a better screencap library. Suggestions are welcome.

After reading a scathing review of the Hugh Jackman/Kate Beckinsale movie Van Helsing, which differed from my own experience more in reaction than in fact (mine was much closer to the experience excellently summarized by sekl—which makes sense, considering I was two seats away), I started thinking about just why I enjoyed the movie.

Because, to be honest, it was terrible.

But terrible in a strangely entertaining way.

While watching it, I thought—many times—that this is what happens when you put every cliché you can think of into one movie. (“Oh, of course the road goes along the edge of a cliff!”) Depending on your mood, it could be the most tedious or most hilarious thing you’ve ever seen. I also spent most of the movie trying to figure out whether or not it was intended to be a comedy.

And thinking back on that, it hit me. Van Helsing is the monster movie equivalent of The Eye of Argon.

For those of you who aren’t familiar with it, The Eye of Argon is reputed to be the worst fantasy story ever written. It’s the tale of the barbarian Grignr and his quest to steal the titular jewel, filled with cruel swordsmen, an evil wizard, disgusting creatures and a beautiful, captive princess, written with prose so purple it’s a wonder it doesn’t creep into the ultraviolet. And yet, reading it, you can never be sure whether it’s intentional parody or an earnest effort by someone who just didn’t realize how bad it was.

Traditionally, Eye of Argon is read as a group, each person trying to keep a straight face as long as possible and passing it on to the next once he or she bursts out laughing. Sometimes getting through a whole sentence about “livid wilderness lands” or “keen auditory organs” is a real challenge!

Read The Eye of Argon… if you dare!

Edited June 19: The the site I originally linked to has vanished, so I’ve re-linked to a copy that’s still up.