All the Linux desktop action these days is in KDE and GNOME, but on older hardware, servers, or anything else where you need to squeeze every last ounce of performance from the box, something lighter is needed. 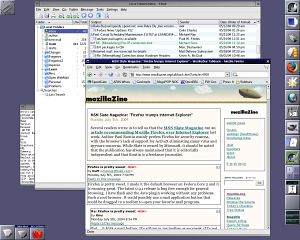 My Linux box at work — a 300 MHz Pentium II — runs WindowMaker. It’s familiar, it stays out of the way, and it doesn’t tie up the memory or CPU that a modern version of KDE or Gnome (or Windows, for that matter) would. But you need to add applets like a clock or a desktop pager. You can find them easily enough — I ended up using the aptly-named wmclock and wmpager – but there’s a significant problem with both. WindowMaker lets you change the size of the dock icons, but when I shrank the dock to get more space I discovered that both applets have a hard-coded size of 64×64 pixels.

As you can see, a 64×64 applet just doesn’t work in a 48×48 space. It surprised me, though, since these dockapps are designed specifically for WindowMaker, and it’s WindowMaker itself that lets you change the size. You open up Preferences, change the size, and restart WM. Just menus and buttons. No config files, no registry, no third-party add-on. This isn’t an esoteric hack that takes serious effort to find, it’s a basic feature. You might as well design a Mac program that assumes the Dock is on the bottom of the screen. For most people it will be, but it’s not rocket science to move it.

In my ICS classes, they always discouraged us from using “magic numbers” — just throwing a number in the code without identifying or abstracting it. There are two very good reasons for this. The first is that you might forget what this 64 is doing. The second is that you might decide to change it later on, and it’s much easier to change one SIZE=64 definition than to track down every 64 and hope you’ve neither missed any you need to change nor changed any you need to leave alone.

Those dock applets are stuck at 64×64 pixels because the programmers were thinking in terms of the pixel grid, not in terms of actual display size. END_OF_DOCUMENT_TOKEN_TO_BE_REPLACED