J. Gregory Keyes has fast become one of those authors whose work I will pick up knowing nothing more than who wrote it. I enjoyed his work in the Babylon 5 and Star Wars universes, but after reading the four novels of The Age of Unreason and these two, I can say I’ll definitely be picking up The Briar King when it comes out in January.

Now, The Age of Unreason is probably Keyes’ most well-known work to date. (If the title doesn’t sound familiar, chances are you’ve heard of the first novel, Newton’s Cannon). It takes place in an alternate Eighteenth Century in which Isaac Newton discovered the key to alchemy, transforming the world with new technology… and setting off an arms race of sorts. What begins as an alternate history becomes an epic battle for the future of the world, and ultimately of humanity itself.

While I’d recommend someone curious about Keyes’ writing start with Newton’s Cannon, I’d like to call attention to his earliest published novels, The Waterborn and The Blackgod, collectively known as The Chosen of the Changeling. 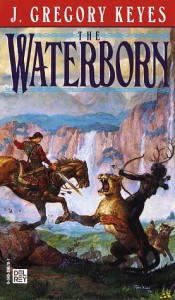 The world of these novels is one in which there are spirits, or gods, in every place, in every stone or tree, in every forest, meadow, or stream. One of the main characters, a young man named Perkar, eager to prove himself to his family, his clan, and the stream goddess he loves, sets out with his king to negotiate with the Forest God. But Perkar has his own quest in mind, one which he has not thought out as well as he could, but one which ultimately changes the world.

At the other end of the world is Hezhi, a princess in an empire which worships the River as the only living god. According to legend, the royal family are descended from the River himself, and they have powers themselves. But sometimes, as they reach the cusp of adolescence, those of royal blood are taken away, and never seen again. And Hezhi is nearing that age. Her quest is one not of deeds but discovery, as she seeks to learn what happens to those who are taken away, what it means, and what fate lies in store for her.

The Waterborn is Keyes’ first published novel, and is definitely less polished than his later works. Perhaps the hardest part about reading the book is Perkar’s incredible stupidity through much of the book until he finally begins to realize what his mistakes have cost him. However, it does inform the character, and the consequences are explored more fully in the second book.

One thing Keyes excels at is taking his viewpoint characters from opposing societies, ideologies, or allegiances. He is the only author on The New Jedi Order to actually make me root for one of the Yuuzhan Vong, for instance, and he does a good job at keeping Ben Franklin and Adrienne on opposite sides for much of the Unreason series. Here, too, he successfully keeps both Hezhi and Perkar interesting and sympathetic even though it is unclear whether they will become allies or enemies. He takes this ability even further in the second book, which introduces a third character who is clearly opposed to both Hezhi and Perkar, whose motives are definitely villainous, and yet who you can’t help but hope will succeed (at least until he comes into direct conflict with the others). 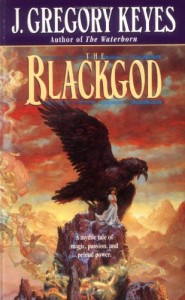 While The Waterborn is a good fantasy novel in itself, it is The Blackgod which really shines. The first novel manages to tell a complete story, and yet everything in the second novel occurs as a natural consequence of the events in the first. It also presents a third society (culture clash is another thing Keyes is good at), deepens the history of the world, and deepens its mythology. If the first book is about meeting one’s destiny, the second is about finding one’s identity, as many characters face questions of loyalty, independence, and morality.

Lastly, one of the interesting things about the world Keyes has created is that it is not the standard European medieval fantasy setting. The closest analog I could think of to the real world would be the trio of Russian, Mongol, and Chinese, with a dose of Plains Indians thrown in with the Mongols. (Once I realized this, it helped me immensely in trying to decide how to pronounce the Nholish names!)

I know this review has rambled considerably, but at least it fits in with the title!

One thought on “Book Review: The Waterborn and The Blackgod”