Since our apartment complex was taken over by new ownership and management last year, they’ve embarked on a months-long project to “rehab” the complex. In some cases, this meant long-overdue repairs like replacing all the plumbing and water heaters, or rebuilding the balconies with less termite-laden wood. In some cases, this meant cosmetic changes like prettying up the main entrance with a trellis and new steps (still in progress).

There’ve been problems along the way. The plumbing work forced us to move everything out of our storage space for several months, and they’ve delayed things with little explanation and started up again with no notice. They tried out new color schemes in our section back in August, and still haven’t gotten around to a final paint job. They told us to move everything off our balcony just before Thanksgiving, but didn’t actually remove it until January (by which time many of our neighbors had moved things back).

Sometimes the changes themselves have been ridiculous or annoying. They’ve decided to fence off the lawn in our courtyard so that it can be attached to an expanded pool-and-picnic area. I don’t think it occurred to anyone that people liked having a lawn that wasn’t behind a locked gate.

But the most bizarre change has to be the garage doors they’re adding to the carports. They’ve widened and squared-off the posts so that they can put in standard-sized garage doors, despite the fact that this (a) makes it very hard to park in the middle spaces (I’ve already scraped the bumper once, and this is with a Sentra. I’d hate to think about parking here with an SUV or pickup. A Hummer? Forget it!) and (b) accomplishes absolutely nothing. The section is shared by five cars, and two of the doors are double-width, meaning that four of those cars have to share a door with a neighbor: 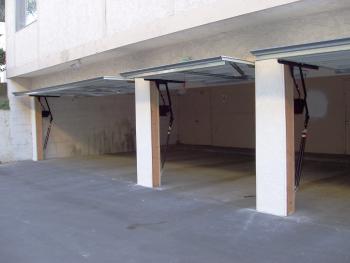 But what’s really annoying: There are locks on these doors – even the shared ones:

Yes, your neighbor can lock your car in or out of its space by locking his own garage door. Yes, you need to buy your own lock in order to prevent someone else from making your car immobile. No, having the garage door there in the first place does nothing to protect your car – from anything.

What the heck were these people thinking?