Friday night at Comic-Con. After walking around all day in costumes, we returned to our hotel, got cleaned up, had dinner at the hotel restaurant and got in line for the shuttle back to the convention center to catch “The Worst Cartoons Ever” at 9:00.

Except only one of us made it onto the bus.

We’d thought about going back to the restaurant for dessert later (they had Bailey’s cheesecake), so I did something stupid and went back to check the hours. (If they were going to be closed, we’d go somewhere in the Gaslamp area like Ghirardelli.) This took longer than expected, and the shuttle arrived in the meantime.

The shuttles only run every 20-30 minutes at night, and we had barely 30 minutes to the screening. Chances were if I didn’t catch this one, I wasn’t going to make it.

I fought my way upstream through the crowd that had just gotten off the bus, saw that Katie wasn’t at the stop, and ran halfway down the block as the shuttle pulled away…and immediately stopped at a red light.

So I pulled out my cell phone and called Katie, who was in the process of calling me to ask where the hell I was. Whichever call connected, I started out with something like “The &@^#*& driver wouldn’t let me on the bus!” We each fumed a bit, the light turned green, and the bus pulled away.

I wasted a precious minute trying to decide whether it was worth trying to catch a trolley or something. I figured their schedule was about as bad. Driving didn’t even cross my mind — it probably would have taken me long enough to park that it wouldn’t have helped anyway. If I’d really been thinking I would have walked around to the front of the hotel and hailed a taxi.

Maybe it was that I’d spent the day dressed as the Flash. I decided to run.

I knew the route to get to the convention center. We’d walked it the previous morning, and it took about 25-30 minutes, so I figured if I ran part of the 1.2 miles I might make it. 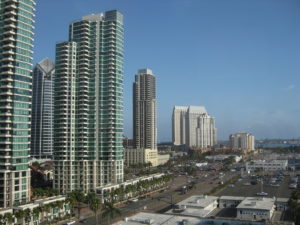 This photo shows roughly the first half of the route I had to take, from the Holiday Inn where I was standing, down almost to the water’s edge near that last tall building, then a turn to the left for about the same distance.

So I ran from the back of the Holiday Inn down along Pacific Highway. I passed a long block of dark, utilitarian buildings (warehouses? customs offices?). Their half-empty parking lots were surrounded by 12-foot-high chain link fence and gates labeled “This is not a gate” (seriously). I dropped into a jog or walk from time to time, and rested anxiously while waiting for traffic signals to change.

I didn’t see many other pedestrians, which might not have been a great sign. I seriously considered hopping a pedicab when I reached Harbor, but thought, “Oh, I’m close enough, I won’t need one.” And promptly got stuck at the next three lights.

Somewhere around the Hyatt I began to wonder if I’d make it in time, and when another pedicab driver came by and offered a ride, I had to ask.

“How much to the convention center?”

I hopped in, and we took off at a much faster speed. Fast enough that, looking back, I really should’ve been worried about the fact that I was only a few feet from the asphalt with no seat belt. I barely had enough time to pull out my phone and text Katie to verify what room I needed to go to, when we reached the Marriott–

—and the bicycle chain broke. Or at least slipped off the gears. As if this trip needed any more obstacles! At that point, though, I was basically across the street from the convention center, so I handed the driver the cash, jumped out, and ran the rest of the way, pulling out my phone to let Katie know I was there.

I made it on time. There was even enough room that Katie had been able to save me a seat. And enough time to catch up…

Because that’s when I found out what had been going on on the bus.

I, Katie, had an equally hair-raising, if less sweaty, experience. I’m filing it under “you get what you pay for” and hoping I never repeat it. I should have taken the hint from the departing passenger who remarked, “This guy is an awesome driver,” but his tone made it not entirely clear just how sarcastic he was being.

I got on the bus despite lack of Kelson, hoping that either he’d make it after I boarded or the driver would wait a few seconds if he saw someone running for the stop. No such luck. I heard the knock on the door at the red light, and along with everyone else did as much of a prairie-dog maneuver as I could manage, but couldn’t see what was happening. I had a suspicion that it was Kelson, which was confirmed when he called me. I told him that if I’d seen him I’d have asked the driver to let him on, but I couldn’t. I felt really dumb for getting on the bus in the first place.

Now, I’ve seen drivers of free shuttles, municipal buses, charter buses, and school buses let passengers board in odd places if it was clear to the driver that they just didn’t make it to the exact stop in time. And the bus in question was less than half full. To me, it didn’t make much sense from a service standpoint to deny passage to someone who could have boarded and sat down safely by the time the bus would be moving again. And, I admit, I was mad that the driver had pissed off Kelson. So I said, loudly enough to be sure he heard me, “That was my husband you wouldn’t let on!”

All I really wanted was to let him know he’d split a party, which most of the other drivers we’d seen had tried very hard not to do. I wasn’t expecting an answer, beyond a possible “Sorry” or “Hah, too bad.” However, someone had clearly emptied several specimen trays over this guy’s cornflakes, because he wasted neither time nor volume in responding.

“They’re called STOPS, lady! The bus STOPS at the STOPS and if you want to be on it you better be there! Don’t you yell at me! And if you give me any more trouble I’ll put you off right here!”

As this was essentially “STFU biatch,” I decided saying any more would just be labeled “trouble,” and kept quiet. But he didn’t. “If you can’t get on the bus, you don’t bang on the door, you wait for the next one! And if you have a problem with me I’ll gladly give you my card and you can take it up with Transportation.” And when I thought he was done, he went off again. I was a little shaken up by the violence of his reaction. Eight words that don’t include any curses don’t usually merit half a minute of haranguing someone you’ve threatened with substantive retaliation if they defend themselves. And dude, you’re a head taller than me and twice as big around. What kind of size do you think I need cutting down to??

When Kelson called back to report that he was making his way on foot, I answered in my Perky Customer Service voice, hoping the driver wouldn’t realize it was me. It was only as we got off the bus that I saw the observation mirror; apparently he did have a sense of what constituted “trouble” and what didn’t. He exited first, as the drivers always do (in the hope of tips, I presume, if SD shuttles are anything like Vegas ones), and announced loudly to a uniform-shirted woman standing at the curb with a clipboard, “There’s a lady on here with a complaint.” This must be Transportation. I hadn’t decided what to do until that moment, and I decided to make his characterization of me as a troublemaker look as wrong-headed as possible. As sweetly as I could, I apologized for being out of line when he was only trying to do his job, and assured him it wouldn’t happen again. He looked…confused. Which was a damn sight better than satisfied. I did consider that it was the “weak” thing to do, but what with the state I was in, I figured I wouldn’t give a very good account of myself in an official report.

Kelson again. Fortunately, the panel was worth it. Yes, “The Worst Cartoons Ever” were exactly what it said on the tin, but in that sort of train-wreck way that grabs hold of the brain with utter fascination.

We cleared out before Spike and Mike’s Twisted Animation and caught a shuttle back to the hotel — thankfully with a different driver (though we’d planned to simply ignore him and hope he didn’t pick a fight).

The restaurant was still open for drinks…but the kitchen had closed. They weren’t serving dessert anymore.

One thought on “Comic-Con Triathlon: Running Through Downtown San Diego at Night”