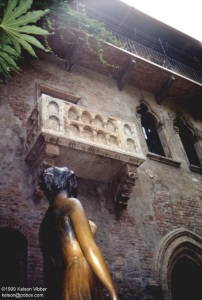 It seems that the city of Verona wants people to text-message “Juliet” (of Romeo and…) [note: originally linked to Reuters] instead of writing notes and sticking them to the walls with gum. (Too bad it wasn’t in Singapore.) Apparently the notes are damaging the walls of the 13th-century building, and they want to set up a screen and have people send text messages to it using the phone.

There’s a small courtyard with a balcony, a gift shop, and a statue of the Shakespearian heroine. According to the article it was originally an inn, but has long been associated with the Capulets. “Acquired by the council a century ago, it was officially designated ‘the house of Juliet’ in 1935.” I don’t recall seeing any notes on the walls when I was there in 1999. Either I’ve just forgotten, or it really has gotten worse in the last five years.