The Mozilla Corporation has counted 100 Million downloads of Firefox! 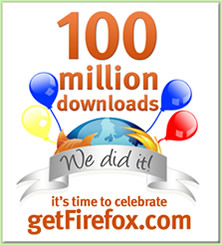 Even if the numbers don’t correspond exactly to users, they show that despite concerns of slowing interest is still high. 100,000,000 downloads in the first year is an incredible number!

Congratulations to Mozilla, to Spread Firefox, and to everyone who has contributed to building or promoting Firefox!