I love Netflix. I love their selection. I love being able to just make a list of movies I’ve been meaning to watch, and see them show up one by one. But the queue model doesn’t work so well when you want to watch a specific movie now. That’s where you need a retail store, or download-on-demand.

One of our local movie theaters is running a series of “Flashback Features”, and this coming Wednesday is Young Frankenstein. I thought, given the number of references, if would be fun to watch Son of Frankenstein before we went. No time for Netflix, and Blockbuster didn’t have it, so I decided to try a local video store.

You can find all kinds of things at local stores. Blockbuster might toss something that doesn’t pull in $X/month, or doesn’t fit their market research. Shelf space at a Blockbuster is precious. They stock lots of copies of new releases. They keep their aisles wide. And they store movies face outward, so each title takes up more space. A local video store will cram as many movies as they can onto the shelf, spine-outward, sometimes laid sideways on top of each other, and they can add more shelves until they run up against fire regulations. The space freed up by tossing an underperforming movie is nothing compared to the possibility that someday, someone might rent it. This store had videotapes that were still in the oversized boxes that went out of style in the late 1980s!

The downside, of course, is that they probably won’t have enough staff to keep this larger selection sorted. The S section at this store consisted of at least eight shelving units with four or five shelves each. I found all sorts of movies I’d forgotten about or never even heard of in the first place (there’s a Skulls III? With Glory?). If I’d been looking for a random movie to watch, it would’ve been great, but I was looking for Son of Frankenstein. By the time I gave up looking, I figured there was no point in asking a clerk whether they had it or not. Even if they did, I’d still be stuck searching through 40+ shelves.

Not that Blockbuster gets it right all the time. I noticed an anomaly in the Horror section today: 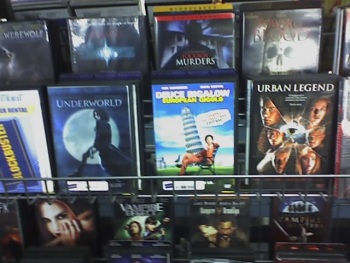 Although given what I’ve heard about Deuce Bigalow: European Gigolo, perhaps Horror is the right category for it.

In the end, I called up my parents and asked if they had a copy of Son of Frankenstein. It turns out they did, so the whole thing dropped out of the realm of commerce and into the realm of borrowing.