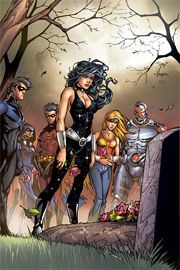 With current and former Teen Titans dying by the handful in DC’s big events, Infinite Crisis, World War III and Countdown, I’ve decided it’s time to take a look at the comics’ body count. Going back to the beginning of the team, which members have died? Which have come back? Here’s a list of all the dead Titans I could think of:

Update: Added a few more (thanks to the Newsarama forums)

Update (July 1): I think by now anyone likely to be reading this knows what happened in Flash: The Fastest Man Alive #13, so here’s a Flash update. blankety-blank DC

Update (April 2008): Now that The Titans #1 has confirmed which characters actually died in the Titans East Special, I’ve updated this entry with Power Boy.