Well, MTV is reporting (possible spoilers for JLA movie) that David Dobkin has taken over as director of the still-vaporware Flash feature film. Dobkin replaces Shawn Levy, who himself replaced David Goyer. Keeping up?

Goyer has long experience with super-heroes, having written or co-written Batman Begins, two of the Blade films and the TV show, the second Crow movie, and even did a long stretch on the JSA comic with Geoff Johns. Levy is best known for Night at the Museum and the remake of Cheaper by the Dozen. Dobkin? Wedding Crashers and Fred Claus.

I’m getting the feeling Warner Bros. doesn’t take the character seriously, despite their protestations. 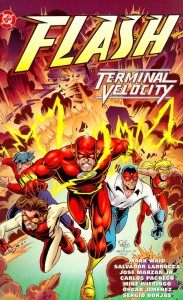 Of note: The film is now being billed as a spin-off of the Justice League of America movie that’s getting lots of press right now. And while JLA apparently features Barry Allen, Dobkin stated the solo outing will definitely feature Wally West. Draw your own conclusions.

Also of note: MTV’s post uses a section of the cover for the Terminal Velocity trade paperback (shown at left), drawn by the late Mike Wieringo.

More info: Flash Movie page at Flash: Those Who Ride the Lightning.

3 thoughts on “Flash Movie Runs Through Another Director”