Last night, I did something I haven’t done in ages: I read a bunch of this week’s new comics.

Over the last two years I’ve gotten behind on just about every comic book I read, and the further behind I get, the harder it is for me to catch up. (Making things worse: I stopped organizing comics as I got them, so I had to find a solid run in order to catch up on it.) After a couple of colds kept me on the couch earlier this year, I started finally making some headway, and I’ve reached the point where I’m current on six — count them: six ongoing comics:

Saga: The sci-fi drama about family is also the book I’ve kept up with the best, despite the fact that I absolutely must wait until the inquisitive six-and-a-half year old is in bed before I open the book. I did fall four months behind at one point, after Isabel’s disappearance. I just couldn’t bring myself to pick it up for a while. I didn’t want to know who was next.

Astro City: This one was “easy” to fall behind on because it’s isolated from other series and the stories tend to be short by modern standards. This also made it really easy to catch up on ~15 issues because I could read one or two at a time and still get a full story. The sequels to classics were fun, and I’m fascinated by what’s been revealed about the Broken Man.

Flash: This book really goes by fast. Seriously, with double-shipping, I keep picking up an issue and discovering that I’m already two or three behind.

Titans: I missed an issue of the crossover earlier this year, and my local shop sold out of it, and I finally decided to just buy the missing issue digitally and plow through. I really want to like this book more than I do, but I’m beginning to think it may be time to drop it after the current story ends. (It’s still better than the DEO kids era)

Jessica Jones: I was a fan of Alias back in the day, and while this is a little more plugged into the mainstream Marvel Universe than I remember that book being, it’s still got the same snarky sensibility. Just reading her complaining to Maria Hill about LMDs was hilarious.

Lady Mechanika: The first series of this steampunk adventure was delayed so long I decided to wait until it was done before reading any further. And then the gap hit. I felt so bad at last year’s Long Beach Comic Con when I talked to the writer and had to admit to her that I hadn’t read it in over a year. I finally caught up, so if I run into her or the artist this year, I can actually talk about the comic! My favorite has been “Tablet of Destinies,” both in terms of story and for the way it reframed alchemy as the misunderstood remnants of ancient nuclear physics.

I’m still behind on I Hate Fairyland and Saucer State (and Shutter, but that’s finished), but I’m at the point where I’m able to re-evaluate my pull list and take another stab at paring down my collection. Which has led to some interesting decisions (but that’s for another post).

I also finally got around to: END_OF_DOCUMENT_TOKEN_TO_BE_REPLACED

Somehow I’ve managed to end up watching mostly shows based on comic books this year. And amazingly, there are enough of them out there that I have to pick and choose. It seems I’m able to keep up with about 3 shows on a weekly basis, and still fit in family, work and other hobbies.

The Flash: I’m still amazed that 1. there’s a Flash TV show, 2. it’s good, and 3. it’s successful enough that it’s actually been renewed. This is the one show I make an effort to watch the night it airs, and I’m enjoying it a lot more than I’ve enjoyed the comic book in the last few years.

iZombie: The other show I’ve managed to stay current with. I’ve found that as fun as the case of the week is, it’s the continuing subplots that keep me coming back: the search for a cure, the back and forth with Blaine and the zombie population of Seattle, Major’s living hell, etc.

Supergirl: This has turned out to be a lot of fun, though I’m not *ahem* super-invested in it yet.

Agents of S.H.I.E.L.D.: Uneven. I’m finding the Inhumans storyline tedious, but then I’ve never liked that sort of story much. Simmons’ adventures on the other side of the obelisk, though….I’m really intrigued by that. (Note: I’m behind a couple of weeks, so I haven’t had a chance to watch “4,722 Hours” yet.) Update: “4,722 Hours” was absolutely fascinating. The Hydra/Inhumans stuff is really turning into a slog.

I am really looking forward to Jessica Jones. I was a fan of the original Alias comics, and this group did an amazing job with Daredevil. Update: It’s fantastic. Even better than Daredevil. But it’s intense enough that I only want to watch one episode at a time, when I can follow it with something lighter.

The Librarians: Fun popcorn adventure with a literary bent to it. Not sure I’m totally sold on Prospero and Moriarity as the villains, but if they follow last year’s pattern, they’ll mix things up.

Heroes Reborn: It was a lot better than I expected, but not enough to keep me.

Meanwhile, I’ve given up on “Once Upon a Time” completely. It just slowly turned into a parody of itself. “Castle” was still fun last I caught it, but too far down the priority list to keep up with it. 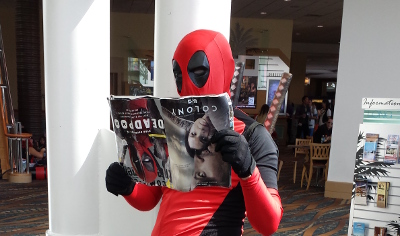 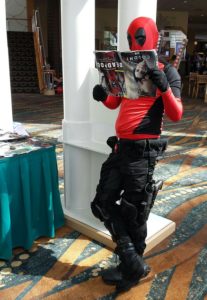 Keeping Artist’s Alley as the centerpiece of the show has broadened it a bit into a show about comics and art. END_OF_DOCUMENT_TOKEN_TO_BE_REPLACED

Two of my fan interests sort of intersected* with a pair of articles I wrote last night, as I found myself looking at the Flash and Les Misérables in the late 1930s/early 1940s.

I review Orson Welles’ Les Misérables radio play over at Re-Reading Les Mis. Last weekend I stumbled on a cassette recording of the 1937 series, but since I don’t have anything portable to play cassettes on anymore, I went looking online, found it at the Internet Archive’s Old Time Radio collection, and listened to it on the way to and from work for several days. (I wish I hadn’t already used the Cassette…now I remember pun.)

A 1943 Flash comic book features Jay Garrick playing every role at once in a stage play, quick-change style, when the entire cast is quarantined for a measles outbreak. I’d recently updated the scans on an old post on the one-man team trope. The Disneyland outbreak made me think of the story, and I’ve posted a few scans at Speed Force.

*They’ve been intersecting all week, actually, since the actor playing Pied Piper on the Flash TV show is playing Marius on Broadway right now, and has been posting Les Mis-related stuff.

Five episodes in, The Flash has turned out to be a lot of fun. There are a few things that still bother me (the dead-mother plot being in every.single.intro., for instance, but it kind of has to be), but so far nothing has pulled me out far enough to stop me from enjoying the action and characters.  I love that they’ve gone all-in on it instead of dipping one toe in at a time like Warner Bros. usually seems to do.

Marvel’s Agents of S.H.I.E.L.D. seriously leveled up this season. I’m a couple of episodes behind, but damn, this show has been knocking it out of the park. And I like that they’ve (mostly) been avoiding Idiot Ball tropes — if someone does something stupid, it’s because it makes sense for the character, not because the plot requires it. For example: So many shows would have had Coulson trying to keep his mental issues under wraps from everyone for half the season, but you find out right away that he’s told May, has her documenting it, and has Skye investigating it.

Grimm really needs to decide whether Wu knows about Wesen soon, or things are going to blow up. Or maybe that’s what they’re going for.

Castle almost lost me during the season premiere with the disappearance/amnesia mystery, but they pulled back from the brink by giving us (and Becket) solid evidence to support his story. They’ve managed to avoid falling into frog-eating clone territory. Still, since the show is mostly a standard police procedural, the only reasons to watch it are (1) the characters’ banter, which is still intact, and (2) the occasionally crazy plots. Speaking of which, “Meme is Murder” just barely managed to avoid being a Very Special Episode about how Snapchat Can Kill You! (tune in at 11). Barely.

Once Upon a Time….I want to like this season more than I do, but it’s just been dragging on.

Weaving the past and future from Frozen into the OUAT mythology has been interesting, particularly the way the Snow Queen was set up. Anna is probably the best cast — she’s absolutely the same character as in the movie, and even when her actions or speech *should* seem affected, it comes off as being natural for her. Elsa comes off as a slightly different, but still valid, interpretation. Kristoff just comes off as awkward.

But remember that thing I was saying about the idiot ball? Most of the time, characters do things because the plot requires it…or stand there not doing something because the plot (or a commercial break cliffhanger) requires it. Regulars, side characters, and guest stars alike. Except when the character motivation is the plot motivation, in which case rather than show it through action, they announce it loudly like a character in a fighting game.

(And they are totally wasting the Knave of Hearts. He was great in Once Upon a Time in Wonderland, but so far he’s been nothing but a one-note joke here.)