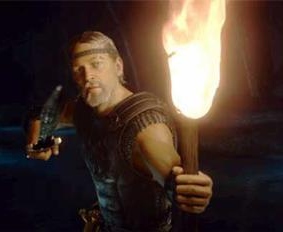 Went out and saw Beowulf yesterday. The IMAX 3D* showing was packed.

The computer animation managed to avoid the uncanny valley most of the time. The previews at Comic-Con looked very strange, but either the presentation helped immensely, or they’ve been refining it since they put those clips together. Movements are dead-on (it’s all motion-capture) and even facial expressions have gotten really impressive. (There’s a sequence at the end which is entirely two characters looking at each other, and it’s all expressions). And when it did slip into characters not quite looking human, the story was usually engaging enough to keep it from being too distracting.

They clearly had a 3D presentation in mind when blocking out shots, because they took great delight in tossing spears, arrows, and the occasional hapless Dane at the audience.

I found myself comparing it to Lord of the Rings in a few places, which isn’t surprising, since Tolkien was quite familiar with Beowulf. I’m pretty sure the Denmark of this period is the source culture for the Rohirrim, as well (both in the books and in the Peter Jackson films), so it’s appropriate that Heorot gives off a vibe of Edoras gone horribly wrong.

The monsters are impressive. Grendel is about as disgusting as can be, his mother literally radiant, and the dragon is a majestic gold, looking more like raw metal than scales. The designs of Grendel and the dragon are used well to reflect the contrast between Hrothgar and Beowulf: one decadent and slimy, one still heroic even in his old age. The initial attack by Grendel gets confusing pretty quickly, and the later confrontation devolves a bit into virtual wire-fu, but the battle with the dragon is suitably sweeping (though I had a few problems with the dragon’s heart). 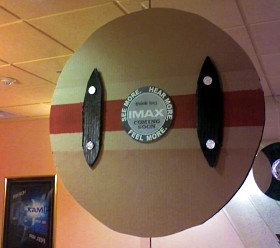 I liked that they used Old English in a few places (Grendel’s dialog, and later, the play in which actors recount the tale of Beowulf’s encounter with Grendel), though I’m not familiar enough** with the original to know whether they kept lines verbatim.

Someone at the theater had made a whole bunch of these cardboard shields and set them along the hallway to the IMAX theater.

Edit: I did finally see 300 last month. I liked Beowulf better. I think the main thing is that 300 was positioned as a historical epic, so when it went over the top (“This is SPARTAAAAA!!!!!”) it seemed really over the top, while Beowulf is set in the epic fantasy mode: monsters, giant sea serpents, demons, dragons, etc., and the movie is in part about the nature of heroic tales and how they get embellished over time. So when the hero splits a sea serpent’s neck all the way down with his sword while falling, or boasts that “I am BEOWULF!!!” it fits.

*The theater gives what can only be described as a sales pitch for how great the IMAX presentation is going to be, which is kind of strange since by the time they give it, you’ve already bought your tickets and sat down inside. It reminded me of the Weird Al song, “Frank’s 2000″ TV” (though if my calculations are right, it’s only 1077 inches) and when they started bragging talking about how many thousands of watts of sound they had, we both started giggling.

**I took a class on Old English in college, which focused on vocabulary and shorter works. Unfortunately I didn’t have time to take the second quarter, which was entirely Beowulf. I did eventually pick up a book that presents the original and translation side-by-side, but I have to admit I haven’t gotten around to reading it.