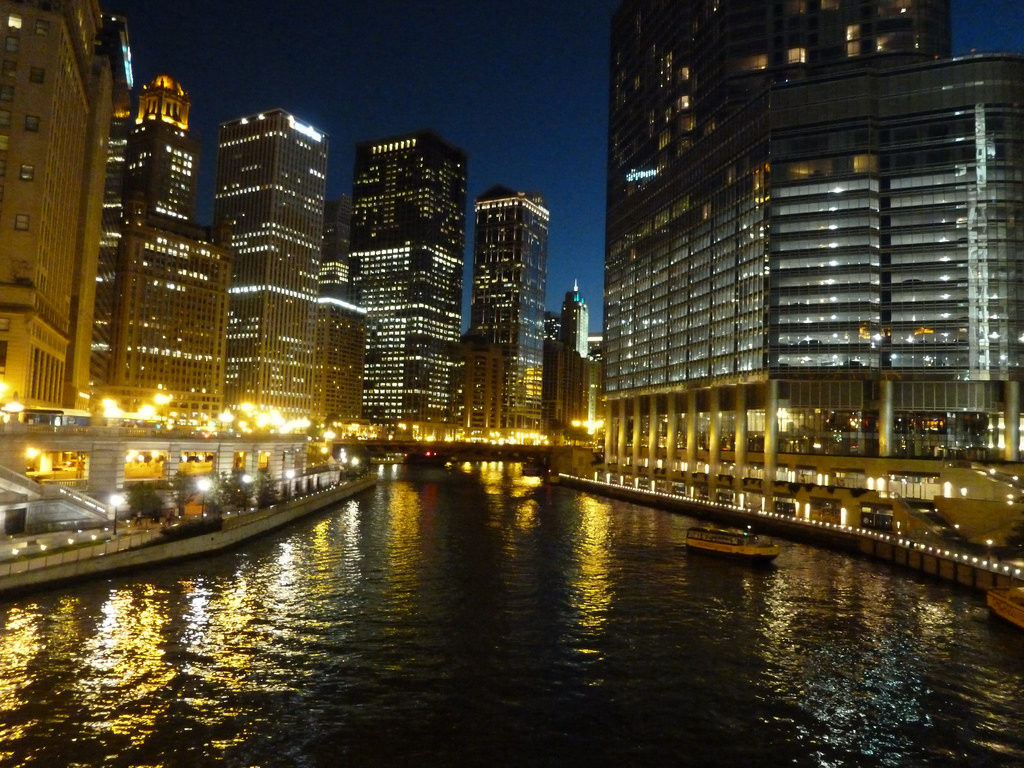 There was an allergy close call the first night there, which put us on alert for the rest of the week. And we all picked up a cold: I got it first, on Tuesday, then J on Thursday, then Katie on Friday, then Marti. You’re supposed to get the con crud after the convention, right? 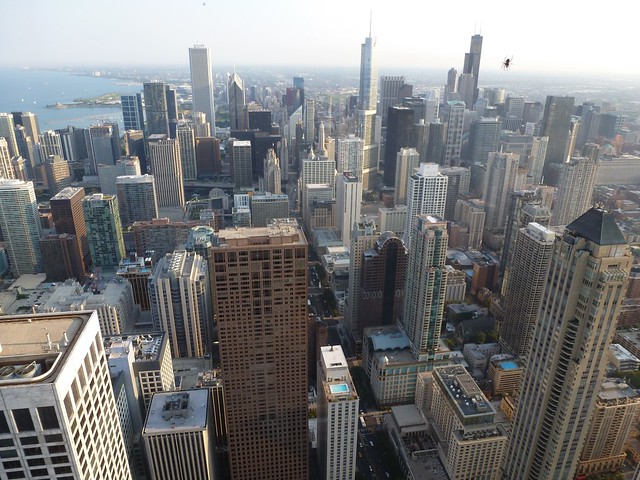 It was almost impossible not to play “spot the fan” whenever we were in the hotel lobby, and we weren’t the only ones doing it: At one point a middle-aged woman randomly said to me, “I can’t believe it’s almost here,” clearly expecting me to know what she was talking about.

Thursdays are traditionally light, and technically there was half as much programming going on that day as there was on Friday, Saturday or Sunday, but the crowds had arrived. All weekend, there was a permanent low-key hangout in the lobby, and the hotel’s main bar was packed every time I walked by it while it was open. 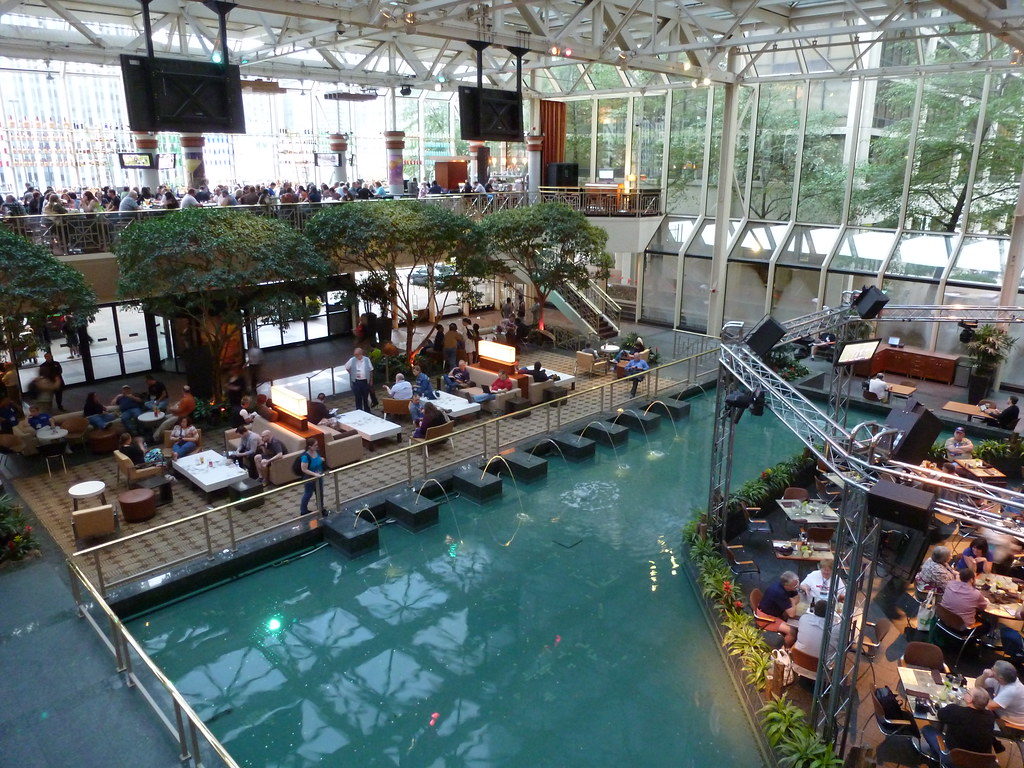 For some cons, the exhibit floor is the heart of the con. For a Worldcon, it’s the programming. Topics of discussion varied widely, from things you’d expect to find at a science fiction convention (what kind of interstellar trade can you have in a universe without faster than light travel?) to things you really wouldn’t (a discussion of fantasy tropes in musical theater). I never thought I’d end up at an SEO seminar at a Worldcon (and apparently neither did a good chunk of the audience, since most of the questions in the Q&A section were more focused on ways to use Google than ways to make Google like your site).

Having a toddler makes cons a bit tricky. At nearly two, J is too old to sleep through a presentation or discussion, and too young to get anything out of one. Mostly we just traded off who was watching him and who was attending panels. I’d walk around the hotel with him, or take him out to a park, and then we’d switch. Brion and Marti kept an eye on him a few times, which was very nice of them (and it helped to have more people around on the evenings that we all went out to dinner together).

We did try to bring him to two panels and a filking event, to varying degrees of success. For the first panel, on the changing face of fandom (more about that later), we just had to trade off one of us in the room, one of us keeping him busy outside in the hall. The second one, a panel on purple prose (particularly published), peppered with pointers both pert and perceptive on preventing problems of perversion in your personal pursuits on the printed page, worked out better. It was loud and raucous, and we stood in the back while he sat on the floor, dismantled a bagel, dug through mommy’s purse, rubbed chapstick on his leg, occasionally grabbed for the power cords and would have tied our shoes together if he knew how. He enjoyed the music in the filk room for the first twenty minutes or so, then insisted on running up and down the halls instead. When he started pulling stuff out of the backpack belonging to a very patient filker setting up her instruments in the tuning room, we packed it in and went back upstairs. 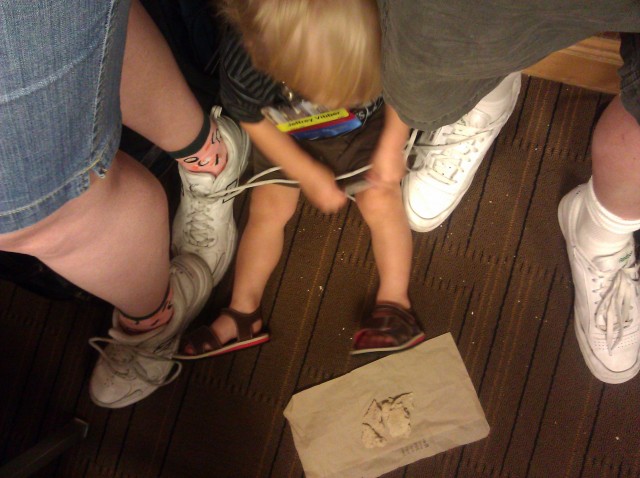 Unfortunately we didn’t make it to any of the big events. We weren’t planning to attend the Hugo Awards ceremony, but I would have liked to see the Masquerade. After a week in town and several days of all of us being sick during muggy August weather, we just wanted to go back to the room and sleep.

One thing that struck me about the dealer’s room was just how many book sellers there were. Some had new books, some used, some autographed. Some were specific to an author or a publisher. There were a couple of webcomics booths, though on reflection seeing Phil Foglio there wasn’t really a surprise. (I found out later he has a long history with the Chicago fandom scene.) Other people were selling figurines, fossils, sculptures, art prints, posters, and costumes — the usual mix you find at this sort of event. 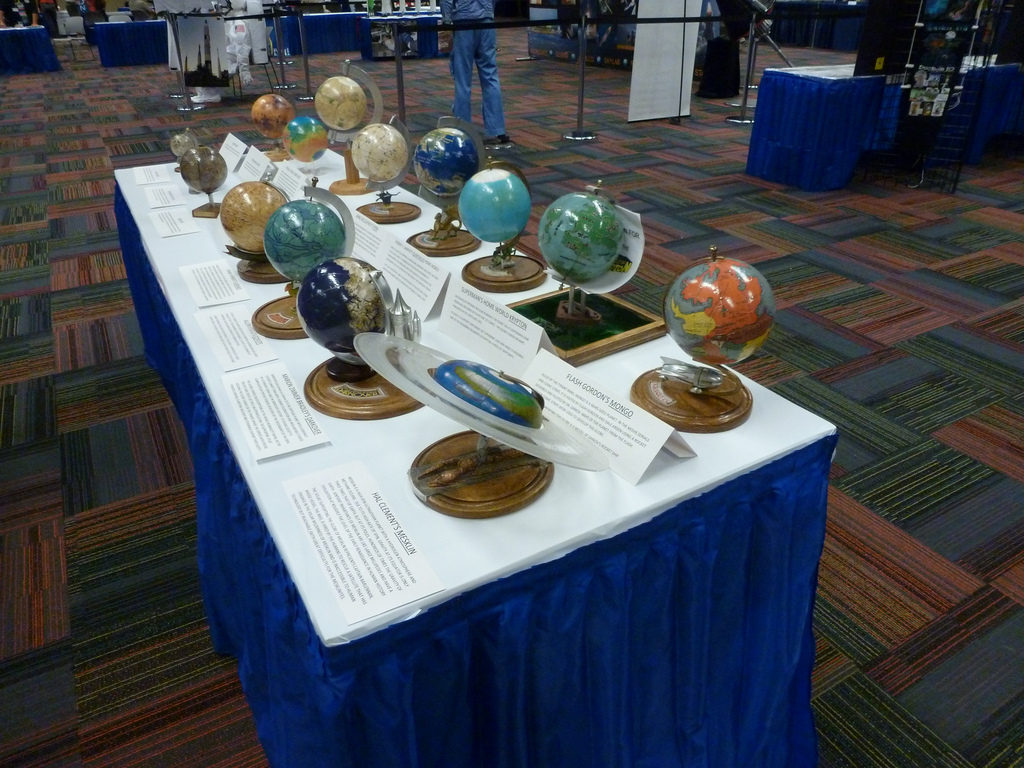 Behind the dealer’s room was the Concourse, basically an exhibit hall. It was kind of sparse, actually: Reps from other cons and bids for future Worldcons, an exhibit on space exploration, a set of globes of real and fictional worlds, an 80s-style arcade, a collection of memorabilia from past Worldcons, and the Rube Goldberg-esque Chaos Machine (now in Steampunk flavor), which I first saw at the 2006 Worldcon in LA.

J was fascinated by the Chaos Machine. He’s too young to build track segments or add gadgets, but he had fun watching the ball bearings run along the track, picking them up, and tossing them into the machine (usually literally). 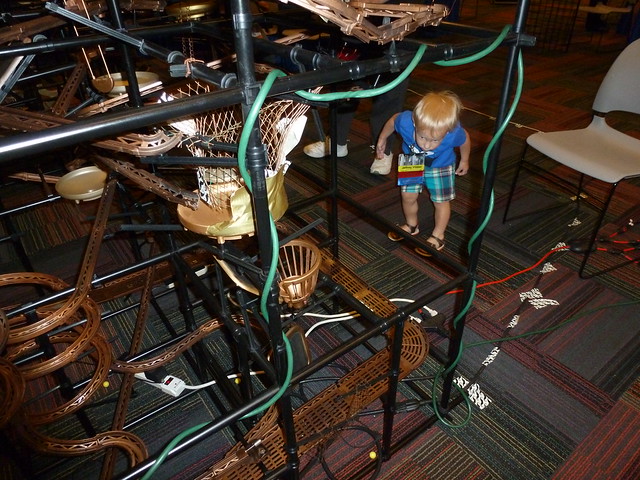 I spent a ridiculous amount of time looking at the program and newsletters from LA Con II, the first Worldcon that I attended way back in 1984. (This con makes five: three in Anaheim, one in San Francisco, and now one in Chicago.) Go, nostalgia! 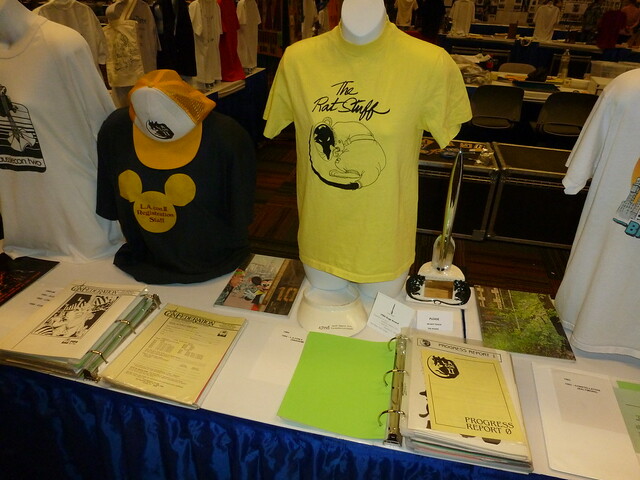 The art show was huge. After years of mainly seeing the shows at Comic-Con International, I was glad to see a wider range of material. As usual, it was primarily paintings inspired by various science, science-fiction, fantasy or horror concepts (or in some cases specific works). One of their features was “The Haggard Room,” a collection of paintings from a private collection, all inspired by the works of H. Rider Haggard.

I mentioned we attended a discussion on the changing culture of fandom as it’s grown from science-fiction books to encompass fantasy books, sci-fi and fantasy movies and TV, comics, anime, role-playing games, video games, LARPs, genre-mash-ups, and of course each new generation’s shows and books.

One odd fact: even as fans’ pursuits become more mainstream, attendance at science fiction conventions seems to be staying fairly constant or dwindling, and the average age is going up. Katie attended a panel at Loscon a decade ago called “The Graying of Fandom” where they didn’t quite seem to get what was going on. This group, on the other hand, was well aware that younger fans are flocking to anime conventions and comic conventions, as well as connecting with fellow fans online.

The fans at Chicon were mostly (but not all) older than the fans at a Comic-Con. But they were more also vibrant than the crowd at the last Westercon I attended, never mind the last Loscon either of us made it to. (Maybe it’s something about LASFS? That was a local Westercon, so I’m pretty sure they’re the group that ran it.)

There was also a much larger, more widespread assumption among attendees that “you should be my friend” and “you are more like me than unlike me,” something that at Comic-Con has dwindled until it’s mostly among dealers/personalities or between them and attendees. Of course, that camaraderie sometimes proved to be of questionable merit. There were many instances of missing what panelists had to say because audience members were talking, either loudly among themselves or insistently to one of us. And the assumption that people will agree with you simply because you are all fans was on full display.

Nothing made this clearer than the blatant elitism at Saturday’s panels. One, on the triumph-by-numbers of fantasy media over hard science fiction, was fairly even-handed when it came to portraying fans of either genre. However, one of the panelists, in an attempt to show that the divide isn’t a question of intelligence or reading speed, brought up a study (which I haven’t been able to find) in which elementary-school students were classified as “slow” or “fast” readers based on the number of books they typically read each week. 4 or more made one a “fast” reader, more likely to be academically successful, she said, and then, with a skeptical look, “How many of you used to read that few books?” From the audience response, none of them ever had to deal with homework, chores, or lessons; and few of them had any other hobbies. “How many of you read that few now?” Apparently, they still had no other hobbies, and no job or kids either. The implication was that she perceived us all as “true fans,” and no true fan would be caught dead reading less than 4 books a week. It was kind of shocking to witness such a blend of exclusivity and inclusivity, and very insulting to be labeled as a “fake” fan, even as a sideswipe. I thought it couldn’t get worse, until a panelist on historical fiction showed exactly how little respect he had for Naomi Novik’s work by repeatedly calling her main dragon “Tem-e-raree.” Seriously, if you’re going to trash something, it doesn’t help to show off your lack of research.

Overall it was a great trip, both the convention parts and the vacation parts. None of us had been to Chicago before, and I’d definitely like to come back sometime when we can do a little more exploring.

I think we’ll be watching the upcoming Worldcon schedule a lot more closely, as well. It’s too big a trip to go every year, but maybe we can manage London in 2014. That would be fun.

Check out all our Chicon 7 photos or our Chicago sightseeing pictures on Flickr.