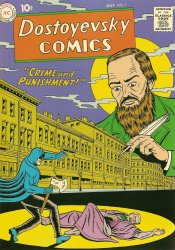 What happens when you put 1940s Batman comics and Crime and Punishment in a blender? No, not shredded paper, but Dostoyevsky Comics starring Raskol. Hilarious parody of golden-age comic book storytelling and classic Russian literature. Though some of the commenters seem to feel it was a personal insult against Fyodor Dostoevsky and Russian culture in general.
(via The Beat)

And moving forward in time once more, we have an answer to the question I’m sure you were all wondering about: What If Gmail Had Been Designed by Microsoft? It shows a step-by-step transformation, with a steady increase in clutter and a steady decrease in usability… sort of in the spirit of the If Microsoft packaged the iPod video. (via ***Dave)