On my way back to work after lunch today, I looked out the window and saw this feathery wisp of cloud with a clear rainbow pattern running from red at the the top to violet in the middle, then turning plain white below. 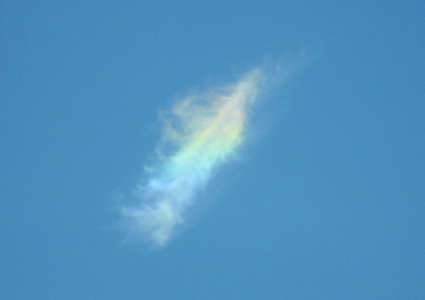 I believe it’s a fragment of a circumhorizon arc, judging by the description:

Look for a circumhorizon arc near to noon near to the summer solstice when the sun is very high in the sky (higher than 58°). It lies well below the sun — twice as far from it (two hand spans) as the 22º halo.

The arc is a very large halo and is close to, and parallel to the horizon. Usually only fragments are visible where there happen to be cirrus clouds.

We’re still 2 months from the summer solstice, but it was 12:38 PM DST (half an hour before true noon), and the sun was apparently near 70.6° high. (The site is aimed at UK visitors, after all.) It also looked too far away from the sun to be part of the 22º halo, plus of course the colors were more well-defined.

This also points out the should-be-obvious fact that ice crystals can still form in the upper atmosphere even when it’s warm — say, 90°F — on the ground, so there’s no need to limit halo-hunting to winter.

I recommend checking out Atmospheric Optics’ additional pictures of circumhorizon arcs, most of which are more complete than this one. Some of them quite spectacular and must have been really impressive to see live.

Update: I spotted and photographed a much larger and more solid arc in May 2010.