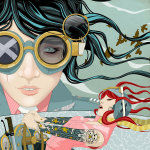 So, what comic book event of the summer has me the most excited? Is it Marvel’s Secret Invasion?  DC’s Final Crisis? The release of The Flash Companion? Geoff Johns returning to The Flash for Rogues’ Revenge?

Well, that last one is close, but it’s actually Comic Book Tattoo, the upcoming ~500-page anthology of comic book stories inspired by Tori Amos’ music announced last December, and Comic Book Resources has a huge article about the project, including art.

(as last time, via Colleen Doran)