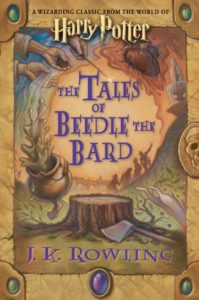 It was a bit of a surprise to learn that J.K. Rowling’s The Tales of Beadle the Bard is actually getting a mass-market printing. This book of short stories, set in the Harry Potter universe with commentary by Dumbledore, was originally released only in a tiny run of seven hand-made copies, sold at auction for charity.

Now the charity is doing a standard hardcover run of the book…and a $100 collector’s edition designed to mimic the original hand-written run. While considerably cheaper than the £1,950,000 Amazon spent to get their copy of the original run, it’s a little more than I’d like to spend. (I mean, I didn’t even spring for the $150 for the special edition of Comic Book Tattoo.) I think I’ll stick with the standard edition.

One thought on “Following Up on Harry Potter”