*sigh* I’m mostly happy with my G1, but I just read about the upcoming Samsung Memoir, which is the first phone I’ve seen that really takes the approach I’ve been looking for in terms of photo capability: instead of a phone that’s also a camera, it’s a camera that’s also a phone. Even the press release describes it as “designed to look and feel like a customer’s current point-and-shoot digital camera.” 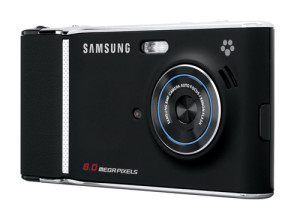 It quotes Samsung’s Bill Ogle as saying, “This is the camera phone that will make people want to leave their digital camera at home” — which is exactly what I want from a camera phone.  It’s what I’ve wanted in a camera phone for years, and now that I finally bought a new phone, now someone’s actually selling one.

On top of that, it’s being offered by T-Mobile, so I’d be able to get it at an upgrade price — or could have if I hadn’t just upgraded to a G1 three months ago!

Of course, the press release leaves out a couple of critical items:

I’ve come to really appreciate the G1’s fully-capable web browser and the Android market for third-party apps, and I’d be reluctant to give that up. If the Memoir is a camera first and a phone second, the G1 is a handheld computer first. As for zoom, I have yet to see a digital zoom that was any better than just cropping an image in Photoshop.  And even with a 3G network, I’ve found it does take time to upload the G1’s 2-megapixel images. For 8 megapixels, I’d really want wi-fi.

Ah, well.  With phones, as with many things, you have to take the plunge sometime, or you’ll keep waiting for the next model, and the next, and the next, never actually make any change at all.

2 thoughts on “Always a Newer Model”