It seems as though every year, around the time of hotel registration for Comic-Con International, people start clamoring for the con to move from San Diego to Las Vegas. More hotel rooms! A bigger convention center! Gambling! Strippers!

It makes me want to headdesk. 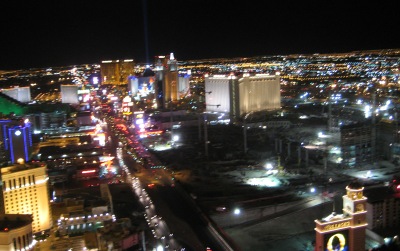 Now, I don’t hate Vegas. I’m not ZOMG in love with it, but I’ve been there more than once and I don’t think it should be removed from the face of the earth. What I believe about Vegas is that it is a law and a destination unto itself, and that everyone should be able to choose whether they go based on the merits of the place, not on the merits of what else might be going on there that isn’t a usual part of the location. Please keep this in mind as I present my list of Reasons Not to Move CCI to Las Vegas:

1. Weather. San Diego may be incredibly hot some years, but it’s coastal. There are breezes a lot of the time, and it’s often quite bearable. Vegas is inland desert and is 99% guaranteed to be nasty hot in July/August. Part of the crazy fun of CCI is seeing costumes on the street, which would become darn near impossible for a lot of people given the temperature.

2. Distance. I’m not talking about the distance for people to get there (though I will in a bit), but the distance between things. It can take over half an hour to get from the front door of one hotel to the front door of the next one over. In San Diego, it’s pretty easy to leave the convention center, go find food that’s not jacked up in price for an inferior product, and come back. In Vegas, unless you take the monorail, that’s a pipe dream, especially given that the convention center is off the Strip and not really near a lot of hotels. Keep reading for more.

3. No public transportation. Well, not NO transportation. There’s the monorail, and there are buses. But the monorail only goes down one side of the Strip, and the traffic on the Strip itself, where the buses run, is a nightmare 24/7. The monorail is not convenient to get to; it runs down the backs of the hotels, and getting to the stations from the street, or vice versa, can take 20 minutes just by itself. (We timed.) Lots of hotels do have shuttle service, but it’s not huge, it’s not universal, and it’s not fantastic. Based on the masses of humanity I’ve seen at the SD Old Town trolley station, I doubt the monorail has enough cars to pack the schedule as full as they’d need to, and I doubt the shuttles will satisfy fans wanting to get to places at specific times. There would need to be charter buses, the way SD does it, but because this is Vegas, they would want either tickets or tips…probably both. Which brings me to:

4. Pay For Play. In Vegas, the dollar is still almighty. You can get a hotel room for $50 a night if you play it right, sure, but you don’t get the perks that identify you to the hotel’s amenities providers as a Good Customer. In some places, if you just want people to be polite to you, you have to pay them. In others, you just get dirty looks if you don’t tip. It’s been said that CCI wouldn’t make a dent in the normal daily Vegas people-traffic; if that’s true, then we’d all be running into this. Think it’s maddening to get slow service because a restaurant in the Gaslamp is full, or because you think you’ve been pegged as a low tipper? Try being in Vegas where they know whether you have spare change. Doesn’t matter if the place has only two parties in the section; if one of them is a Vegas regular and has paid to be part of their Premier Club, he’ll always get better service than the other party. I’m imagining the cheaper hotel restaurants being overrun with congoers who don’t understand the ethos (if you can even call it that); the saddest part is that if they voice any displeasure, they simply won’t be heard because all that’s happened is that they’ve run into how Vegas deals with those they perceive as cheapskates. They discourage you from coming back until you’re ready to spend. And,

5. Everything costs more. More accurately, it’s a case of the substandard being cheaper and the quality merchandise being more expensive. You can get a lot of pure crap for very little money, but you have to be willing to accept really crappy crap. Most stores are either souvenir dives or designer boutiques. I’d bet even the toothbrushes in most of the dives are emblazoned with “LAS VEGAS.”

And the food. Every megahotel in the vicinity of the Strip has a restaurant hierarchy. There is at least one posh place, one just a bit below it, one just a bit below that, a buffet, a theme bar, and a taco/burger/coffee stand. Most of the “nice” restaurants in SD are comparable in price to the lowest-price nice places in Vegas, and there aren’t nearly as many tony upscale spots. Not only that, but the cheap places are much greater in number in SD, and easier to get to (see #2 and 3 above). If there are more restaurants in a megahotel, there is usually a theme place that may be either very posh or very casual, followed by a doubling of one of the lower-priced ranks. They’ll also have bars around the casino floor(s), and occasionally a cookie or ice-cream shop. If the hotel is not a new “mega” type, they’ll have a coffee shop and a nice place, and some coffee/ice cream/burgers. The Stratosphere is the best for cheap eats, but it’s not close to anything. (The biggest souvenir shop in the city doesn’t count.) And at the other end of the Strip, the MGM Grand isn’t bad for it either, though their counter service is tucked away into the winding halls at the back of the place. Sure, there’s fast food dotted around here and there, but chances are that you’re not going to want to make the 45-minute trek to the McDonald’s when you can go a monorail stop away and find the cheap food in the hotels on the monorail line. Which will be mobbed, because nobody’s going to want to take the time to hike across the street and hunt through a megahotel for something they can afford.

Actually, there is one thing that doesn’t cost more: alcohol. Three guesses why.

6. No commuting. To those who come in from, say, Virginia, this may not sound like a big deal. But it’s just plain fact: there are fewer people living within 2 hours’ drive of Vegas than within 2 hours’ drive of SD. With the con in SD, people can even stay with friends (or in cheaper hotels) in LA, OC, or even Riverside, and take a train or other mass conveyance into town for the con. Not so easy in Vegas. Which means that a lot more people would be staying in town, filling up services and probably driving up hotel prices out of sheer demand. Another consideration: Hollywood is not close enough to Vegas for big-name stars to come out by bus for just one day. There’d have to be planes involved, or hotel stays; and with the way insurance works, the cost might be too great for the perceived benefit…especially considering how many lowlifes decide it’s their right and privilege to post exclusive footage to YouTube five minutes after it’s been aired. Dragon*Con suggests that there would still be plenty of star power, but such things as bringing in large portions of new movies’ casts might become much less feasible. 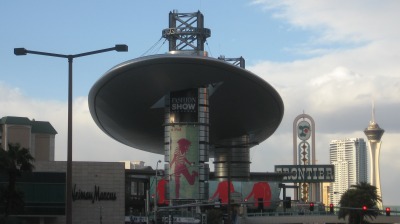 In the interest of fairness, there are a few reasons Vegas would be superior to SD for a giant con of any type:

1A. Parking. Vegas has parking. Acres of it, all over the place, for a lot less than you pay in SD. Anyone driving in would be able to park, for as long as they wanted, probably even wherever they wanted. Then again, #6 above might mean fewer people wanting to park in the first place.

2A. More floor space. The LVCC has nearly four times the floor space of the SD facility. To someone who’s been stuck in foot traffic on the floor at least once every year, this sounds like absolute heaven. Even if the con used only half the floor space available, prospects might be a little brighter for those of us slogging through the whole thing. On the flip side, they don’t have much more in the way of meeting room space; chances are, there’d be a bunch of exhibit space being used as the equivalent of Ballroom 20 and the 6A-F rooms. I’m not sure from the floor plan whether any of the large floor divisions is set up to be the equivalent of Hall H; I may need MeetingMatrix to find out. (Because only a meeting planner could ever possibly have a legitimate desire to know the details of the center.) Also, there are multiple small convention/event centers in Vegas; one of these could easily be used for, say, an exclusive screening of something at night. Ticket sales for 12,000 seats in the Mandalay Bay center would probably cover the rental cost and the rights, with some left over for the Cause of the Day.

3A. More hotel rooms. The Vegas visitor site boasts “over 140,000 hotel rooms,” which sounds fantastic. Throw in the fact that many congoers share rooms, and you have a recipe for much easier reservations than can be had in SD. Downside: the same room can vary in price by as much as $300 from Tuesday to Friday night, so you can bet they’ll be picking a more middling point on their scale for con-block reservations. And this is Vegas, so see #5 above. They’re going to do everything in their power to be sure their Premier Club regulars are able to get rooms if they want them.

If Las Vegas wants CCI, it’s in the way Irvine wants a university: they want the benefits without having the necessary people around. Congoers for CCI, by and large, are not well-heeled yuppies with expense accounts, and we are not there to spend our money at the blackjack tables. The Vegas I know is not enthusiastic about our kind of congoer overrunning its streets and its bars, and it has a much higher threshold for good financial behavior than San Diego—where we already fall short. Let’s do ourselves a favor and start looking for better solutions to the crunch.