One of the coolest things to happen at last year’s Lost panel was Hurley Guy: a large, scruffy, longish-haired guy coming up to the Q&A mike wearing a green shirt. The producers were as amused as the audience, and his prize for asking his question was a tub of Dharma ranch dressing. I caught sight of him again on Friday afternoon of this year’s con, dressed this time in a yellow “I (heart) my Shih Tzu” shirt and pajama pants with a plaid bathrobe. I hung around him, waiting to ask for a picture, as he talked with his friends about when they planned to get to the line the next morning. The consensus was 4 a.m., which I found ridiculous. Later, after giving up on the picture, I learned that people were already camping that night. Even more ridiculous. But for the kind of panel that this year’s, the final Lost panel, was, I can see how they’d decide it was utterly worth it.

I arrived on the Plaza Park lawn as soon as the 8 a.m. shuttle could get me there. No one noticed I was dressed to resemble Kate, and Hurley Guy was nowhere in sight to beg for a photo. The doors opened at about 10:30 for the 11:00 panel, and on the way in we were handed pencils and fliers for “Lost University” (and I also got the “9” card being handed out as a promo for 9). We found out what that was all about at the beginning of the panel, when a clip advertising the website (lostuniversity.org) was played. I haven’t looked at the site, so I don’t know if it’s another ARG or another fan-gathering site. But with “test” questions and “schedules” involving polar bears and hunting boars, it’s bound to be at least slightly funny.

I believe this was also where there were some clips played of “things that might happen” in an altered world of Lost. I can’t remember precisely where this bit was, because I was a good fan and didn’t take pictures of any of the videos. The lineup included a commercial for Mr. Cluck’s featuring Hurley, who had apparently bought the company and had nothing but GOOD luck since winning the lottery. The restaurant was featuring “Australian” combos to commemorate his return from his walkabout trip. Then there was a segment from a “Most Wanted Fugitives” show, letting us know that Kate was still on the run. Apparently, instead of killing her stepdad in the explosion, she’d actually killed the underling he’d sent back to the house to collect his tools.

The panel itself started with Carlton Cuse and Damon Lindelof saying that they planned to make this mostly Q&A, to give back to the fans.

And although they wanted to give out gifts to everyone who asked questions, like they had last year, the network hadn’t given them the budget, so they’d just brought one gift that would go to whoever said the secret word. But everyone was to follow the standard rules and keep it to one question. This was followed by a montage of the best fan videos found on the web, including the infamous “Brokeback Island” and some Robot Chicken-style stuff with action figures. I’d have liked to have a list of those, to look up later and watch in full. 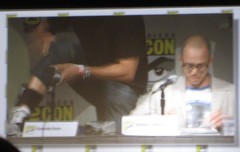 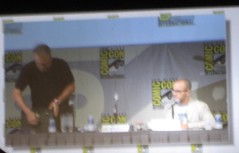 The first question was about how a fan had heard season 6 would be reminiscent of season 1, and how was that going to work? Apparently they’re bringing back the unpredictability that ran rampant at the beginning. To that end, they said that they’re often asked if they’re making it up as they go along, and insisted that they’re not. Just to prove it to us, each took from a “secret hiding place” one sheet of paper, and proclaimed them to be the last two pages of the series-finale script. They located a stapler somewhere, stapled the sheets together, and put them into a double-locked box, each taking a key. The box, they explained, would be taken by someone else to an undisclosed location after the panel, and on the night of the finale it would be brought to the Jimmy Kimmel set, where they’d open it and read the script, to prove that the pages did indeed contain what had just been shown. Gimmicky, but all is well and good. 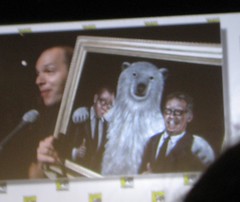 Next, a guy comes up who’s apparently well-known for doing wacky stuff (not Bob Stencil, some other dude) and presents the producers with a wrapped gift. He opens it for them: a black velvet painting of the two of them with a polar bear. The guy also plugged his website: damoncarltonandapolarbear.com. (They repeated it back to him as “damonANDcarltonandapolarbear,” and he and the rest of us took great glee in correcting it.) Again…haven’t dared to look. They did accept the painting.

I believe that a bit after this is where the winner of the theme-song contest was announced. I hadn’t even known there was a contest…made me feel like a very bad fan. The crew had mocked up a credits sequence to the winning composition, which, sadly, wasn’t very clearly audible from where I was sitting. But the sequence was cool.

So then, Hurley Guy took the mike.

Only, it wasn’t Hurley Guy. It was Jorge Garcia.

Wanting to know, apparently, if having the bomb plan succeed meant the previous five seasons would have all been for nothing, because that would seem like a huge cheat. The producers explained that he’d just have to trust them. “Yeah,” he said, “but the last time I trusted you guys you said Nikki and Paolo were gonna be awesome.” Then he asked whether it being the final season meant everything was going to be answered. Like, when Jack and Sayid were torturing Sawyer over Shannon’s inhaler, but he didn’t have it…where exactly was the inhaler? Oh JEEZ, Jorge…”What happened to one question per person???” 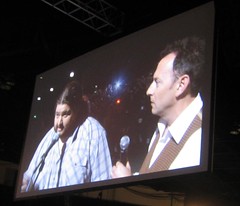 At that point, the cheering from the front got waaaay too loud to just be about the witty banter…and soon, Michael Emerson appeared on the screen, needling Jorge about the question, his character, and everything in general. He was very much in character as Ben, and when Jorge brought this up, saying he himself was acting when playing Hurley, he responded with, “Acting. Is that what you do.” It went on for what seemed like quite a while, but I can’t remember much, except how a comment about how Hurley was played “broadly” got a general condemnatory “oooooooouw” from the audience. Jorge accused him of being jealous over not having won the role of Hurley, and he protested that he’d never tried out.

And then, of course, an “audition tape” was played, during which both actors migrated to the stage.

Bob Stencil made his appearance after this, with a variation on the time-loop question, and pretended to get very confused about it and get a nosebleed. “Oh…gotta find my constant!” The producers had been expecting him and had a custom T-shirt ready for him. He was thrilled.

A fan asked the eternal question: “Does Nestor Carbonell wear eyeliner?” Cuse and Lindelof said they get this all the time (and they do; I was headdesking as best I could with a program booklet), and that Nestor was in the back right now getting ready so they’d just go to the video feed so he could answer it.

The video was of him at a makeup mirror talking to himself and applying eyeliner. After ample laughter time, he looked at the pencil and said, “This is Charcoal. I never use Charcoal.” And went into what I presume is a Christian-Bale-style rant at one of the (probably imaginary) staff. When the lights came up, he was at the front table with the others.

The real Hurley Guy came to the mike after this, both to ask a question and to thank Jorge and the show for giving him a character he could identify with.

At that point, Cuse and Lindelof decided it was time to give us clues about the secret word, which no one had yet said. “Think…blonde. Pregnant.” The audience of course started yelling “Claire” but we were reminded that it could only get you a prize at the mike. Surprisingly, the next question asker didn’t work it in; I guess he really wanted to ask the question he wanted to ask. But the next guy did it, and cleverly. His prize was a seagull statue, to commemorate the bird that Claire had been interacting with in one episode. 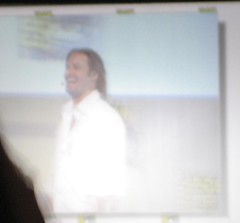 There was one final guest to bring out, and we would get a clip intro for a clue. Jack? Kate? Nope, Sawyer. Audience just about melted. (And with good reason, if you fancy him; the clips were calculated for their hotness factor.) Josh Holloway came out and sat next to Lindelof, and started up what sounded like an innocuous conversation about their “making it up” bit with the box. Then he pulled out a small object and said, “You know what this is?”

“Yeah! Wanna see if it works?”

He shoves the thing into Lindelof’s shoulder, and the sound system plays a buzzing noise…about two seconds after the spasming act is over. So then, after grabbing the key, he threatens Cuse with the taser, saying he’ll meet the same fate as his friend JJ Abrams. “That’s not JJ Abrams. That’s Damon Lindelof.” “Lindel…Linda who?” 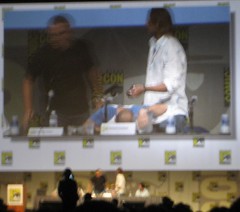 And he stuck Lindelof’s hand in the pitcher of ice water.

Of course, Josh gets both keys and extracts the script pages from the box, with plenty of Sawyer-style nicknames and snark, then stands there and looks at the pages in confusion. “You can’t read!” crows Cuse, and Emerson grabs the pages and puts on Ben-like glasses.

“Sylar and Parkman stand beneath the big top…” Half the audience is confused; the other half, including me, is laughing too hard to hear much.

“You have to go on, Parkman…you’re the last Petrelli.”

Finally, they played an “In Memoriam” montage of a bunch of characters who’d died over the course of the show, starting with the guy who got sucked into the engine (forgot his name) and ending with a rather long bit about Charlie. 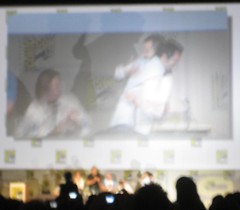 Having heard what had happened at the Flash Forward panel on Thursday, I began to get suspicious and got my camera ready. Sure enough, surprise!Dominic Monaghan came out onstage. He was there for all of 30 seconds and didn’t get to say anything; and of three pictures I managed to take, one’s blurry, one doesn’t let you see who he is, and in the third he’s behind Josh. Figures. (I picked the blurry one.) But I’m not complaining. If they wanted to give a gift to the fans, this panel was a good one. Thanks, guys.