Neil Gaiman remarked on his blog that images his agent emails from Germany end up with the colors inverted, and posts an example of a Coraline poster: 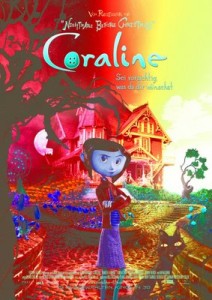 I used to run into this with TIFF images when building websites. (No big surprise, given that there are a million variations on the TIFF format.) I think it was around 2000 or so that I was working on a website for a law firm, and they sent me their logo. The logo, as I received it, was yellow on light blue, so I built a site with black text on a white background for the main areas, and yellow on light blue (matching their logo) for the title, navigation, and borders.

I sent them a link to the test site. They looked at it, and said it was very nice, but could I try to match the color scheme on their logo instead?

It turned out that red and blue had gotten switched around (and possibly more, because I can’t remember how the yellow ended up in there), but anyway it was supposed to be white on light brown. I switched the channels, redid all the graphics and styles for the site, and they stuck with it for several years.